The Witch (Into the Woods)

The Witch of the Woods

Get Rapunzel for herself.
Deliver Jack to the Giant (both failed).

The Witch is the secondary antagonist of the musical Into the Woods, and the 2014 Disney film adaptation of the same name. She is an expanded version of Mother Gothel, the witch from the "Rapunzel" story by the Brothers Grimm, though in the play she is referred to simply as "The Witch".

On stage, she has been portrayed by many actresses including, Bernadette Peters in the original version, Vanessa Williams, and Donna Murphy, who also voiced Mother Gothel in Tangled. In this 2014 adaptation, she was portrayed by Meryl Streep, who also portrayed The Chief Elder in The Giver, Miranda Priestly in The Devil Wears Prada, and Jessica Lovejoy from The Simpsons. Streep received her 19th Oscar nomination (for Best Supporting Actress) in 2015 for this role.

The witch is first seen barging into the home of the Baker and his Wife, who she lives next door to. She tells the couple that when the Baker was a child, his father stole from her vegetable garden to feed his wife, who was expecting a second baby. She was then a beautiful individual with a magic garden. But after the Baker's father stole her magic beans, she was cursed and turned into a hideous witch. As revenge, she takes the family's newborn daughter to raise as her own, naming her Rapunzel. She then curses the entire family, so the Baker would never have children of his own. She tells the baker and his wife that if they can find her a white cow, a red cape, a golden slipper, and yellow hair before the third midnight to come, then she can reverse her curse and will gift the couple with a child of their own. During the journey, the witch continually appears to intimidate the couple and rushes them to find the ingredients as fast as they can.

Meanwhile, as in the original fairy tale, the Witch raises Rapunzel locked in a tower, refusing to allow her outside. When she discovers Rapunzel has been visited by a Prince, the Witch banishes her adopted daughter to a swamp after cutting off her hair.

After the Baker and his Wife finally find the right ingredients, the Witch returns to her former self and gifts the couple with a child. She then attempts to reconcile with Rapunzel, but the girl refuses to return to her. The Witch then discovers she has lost her magic powers.

Soon after, a giant (whom was the wife of the giant that Jack had killed earlier in the film) comes down to the ground and demands that the villagers hand over Jack, causing much destruction. The Witch's magic garden is destroyed, except for a few of the beans. Eventually, only a small group, including the Witch, the Baker, Cinderella, Red Riding Hood and Jack are left. The Witch suggests that they hand Jack over to the giant, but the rest of the group refuse to do so. However, they soon start fighting over who is responsible for the Giant's presence, and soon they all turn on the Witch, deciding it is her fault for growing the magic beans in the first place.

Hurt and fed up, the Witch abandons the group as her 'last curse,' and begins to hurl several magical beans into the ground, expecting to be cursed again with ugliness. She then gets pulled down into a tar pit, presumably dead. In the film version, it's suggested that throwing away the rest of the beans causes her to be completely consumed by the curse. In other words, she kills herself by making it so the curse destroys her entirely.

The Witch, rather than being truly evil, simply distrusts people and the world in general, and tries to keep Rapunzel sheltered from it. In the play, Rapunzel is among those killed by the Giant, hinting that the Witch's eagerness to sacrifice Jack is partly due to her grief for her lost daughter. In the film, Rapunzel's fate is unknown.

Meryl Streep as the Witch in the Disney movie.

Beautiful version of the Witch. 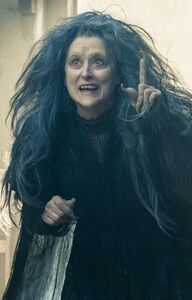 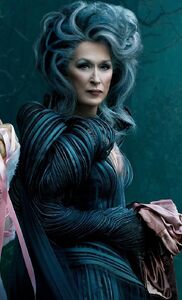 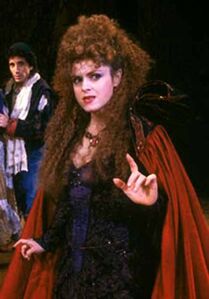 Bernadette Peters as the Witch in the original Broadway production of 'Into the Woods.' 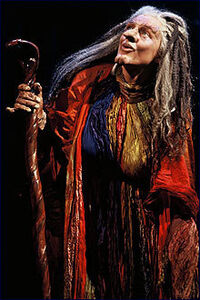 Vanessa Williams as the Witch in the 2002 Broadway version of 'Into the Woods.']]