The Witcher is a recurring antagonist in the Austrian TV-show "Tom Turbo". Notably, the character was rewritten twice, resulting in the Witcher appearing in three different incarnations, each played by different actors (the second incarnation being played by Bruno Max, the third one by Georg Kusztrich, who also played the Greyface).

The first incarnation of the Witcher was featured as a mere stage magician without any magic powers. He only had two appearances in the show.

In his debut episode, he robbed a bank and used his magic tricks to give Tom Turbo donkey ears and a duck beak. Tom and two kids later tracked him down in the sewer. The Witcher used his glue, which he had previous used to glue the ears and the beak to Tom, however the three were finally able to use the glue against him by placing a box on his head and glueing his hands to it so he couldn't get free.

In his second appearance, the Witcher posed as a salesman for snacks in front of a school ship. His plan was to feed a student chocolate with werewolf elixir so the boy would turn into a werewolf and scare everyone out. The Witcher planned to use the ship's position to sabotage a speed boat race in favour of the Ferret, who was participating. Tom fired the Witcher's sticky cloth back at him and at the Ferret, causing him to fail and be disqualified.

The second incarnation of the Witcher, played by Bruno Max, was described as a mix of a stage magician and an actual wizard, opposed to the first one who was only the first (unless one counts the fact that he could mix the magical werewolf elixir).

The Witcher hired small criminal Sigi Schlitzohr to steal a book for him. Noticing Sigi hiding it in a shop, the son of the owner took it and later noticed the Witcher looking for it. Simon brought the book to Thomas and Tom. The Witcher hypnotized SImon's mother into telling him where he went and then made her forget about it. Realizing that Tom, SImon and his friend Jericho were going to a castle to find the Seven Ghosts described in the book, the Witcher decided to let them do the work for him. The three met the castle's owner, who told them that, according to a legend, they would lead to a trasure, but whoever touches themwould become a bat. Aftter they found the Seven Ghosts, who turned out to be small statues, the Witcher appeared. He revealed that he wanted the ghosts because of the power to turn people into bats and hypnotized the boys and the woman into going to the statues and touching them. However, Tom was able to create a force field to stop them. The Witcher then fired a flame at Tom, who used a pan to throw it back. In order to escape being hit, the Witcher transformed himself into a comet and flew away.

The Witcher later got his hands on a mirror that could create evil doppelgängers of people and hired the Ferret to power it via pedalos. After testing it on two girls, the Witcher invited Fritz Fantom and created multiple doubles of him. Fritz Fantom was thrilled over the army at first, but then the Witcher revealed that the doubles only obeyed him and his real plan was not to give Fritz Fantom an army of doubles, but send them to steal and frame Fritz Fantom for it. Meanwhile, Tom met the wizard Selimar, who informed him about the mirror and the Witcher's origin story. The Witcher was a stage magician who didn't have much success, so he turned to dark magic and became a criminal. Tom then went to the abandoned shop where the mirror was placed, confronting the Witcher and the army of Fritz Fantoms. After Tom and the boy Daniel managed to reverse the mirror's effect by treading the pedalos backwards, causing the doubles to return into the mirror, they defeated the Witcher, who had his head transformed into one of a rooster.

At his next appearance, the Witcher was no longer on his own, but had a partner in form of the witch Alexa, who would become his constant partner. The two tried to force a countess into leading them to the Chamber of Seven Wonders, one of them being an amulet that would make evil wozards invincible. However, Tom and two kids managed to throw the amulet into the bright sunlight, causing it to disentegrate.

Another time, the Witcher and Alexa were chasing a woman who had a mask that could make drawn monsters come to life. After they kidnapped her to their castle, they realized that she didn't have it anymore. Alexa hypnotized the woman into telling them that she hid it in the atelier of her nephew, an artist. Taking the mask, the Witcher also kidnapped the artist to draw monsters for them. Tom followed him to the castle, where ALexa and the Witcher were giving the artist a description of how the monster should look like, each having his own ideas. This caused the confused artist to draw a little harmless monster, which the Witcher judged to be fine for a test. Using the mask, he made it come to life. Tom then read a book which the Witcher had mentioned to include informations about the mask. Using a spell from the book, he made the monster feel attached to Alexa, to the Witcher's anger. While the two fought for the love of the little monster, Tom burned the mask by throwing it into the fireplace, causing the monster to disentegrate. The Witcher and Alexa were then trapped in their own magic cloaks they used to trap people in.

The third incarnation, portrayed by Georg Kusztrich, was a complete wizard, lacking any hint of the two previous' incarnations background as a stage magician. This incarnation was the constant partner of Alexa.

Hearing two magic wolf statues known as the Silver Wolves who appear only at a certain time, during which they create a magic beam between them which grands werewolf powers to anyone who walks through, the Witcher and Alexa plan to have the powers, but are aware that their rival Abraxus Rockerzahn is after them as well. Alexa places traps near the place where the wolf would appear, however Abraxus lures others into the traps. When the two magicians appear in the woods to wait for the wolves, Abaraxus uses his magic to render them immobile and waits for the statues to appear. Tom Turbo distracts him by putting a lamp into a tree, making Abraxus believe that the statues are over there. While he walks towards it, the Witcher and Alexa notice that his spell wears off. When the actual wolf appears, Abraxus, after realizing that he's been tricked, rushes towards them, but now he himself is rendered immobile by Alexa, who remarks that this won't work for long. When the Witcher and Alexa are defeated by Tom and the wolf statues diappear without any of the three wizards walking through, Abraxus, who is able to move again, teleports away.

Later, the Witcher and Alexa trap Abraxus in the cellar of a boarding school where they are the only staff members (Alexa as a teacher and the Witcher as the headmaster), stealing his power and channeling it to the students to increase their own magic. Abraxus is able to free himself at one occassion and teleports the school to Africa. Raging, the Witcher storms into the cellar and locks him up again, causing the school to go back to Austria. After one of the students, Daniel, asked Tom for help, the two find out about the headmaster and the teacher being the Witcher and Alexa. They later find Abraxus in the cellar, trapped in a magic circle. After freeing him, Tom and Daniel run upstairs again. The Witcher uses his magic to make the portrait of a soldier come to life, however Tom is able to defeat him. Abraxus takes his power back from the children and they escape the school, leaving Alexa blaming the Witcher.

When watching Alexa working on a magic clock near a railroad, he learns that the clock can send anything passing by the railroads through time. Alexa tells him of the legendary meeting of Witches in the year 1818, where a powerful book was given from one which to the next. However in that year, a young girl took the book and disappeared with it. Alexa plans to send a girl who looks like the one from the photo back in time so she steals the book for them. She manages to get her and two friends into a train, Alexa and the Witcher observing them while being disguised. In the past, the Witcher and Alexa tell the girl to get the book, then they would bring them back to the present. After Tom learns from one of the girl's friends what is going on, he follows them using the clock. The four then manage to steal the book and reflect the Witches' spells. Realizing that the girl will take the book into the present, but for Tom, the Witcher and Alexa decide to follow them in the train, only to realize it's already leaving. The two wizards follow the train, desperate to return to their own time.

At one point, Alexa and the Witcher use dolls resembling Thomas and Tom Turbo to play the Game of 13 Dangers, each step on the board causing the person the doll resembling to get into trouble, like a storm or an earthquake. The end of the game, which the two wizards seek to get to, is to throw the two dolls into the black hole in the middle of the board, which would cause Tom and Thomas to disappear forever. After learning who is causing all that chaos around them, Tom goes to the house where the Witcher and Alexa are playing. He manages to take the dolls away and creates dolls resembling Alexa and the Witcher, threating to throw them into the black hole. The two magic criminals panick and run away. 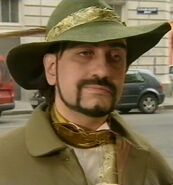 The Witcher as "The Count" 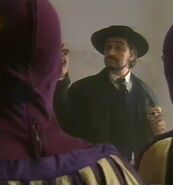 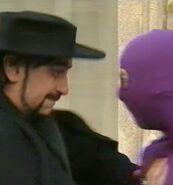 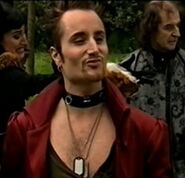 Alexa and the Witcher being immobilized by rival wizard Abraxus Rockerzahn. 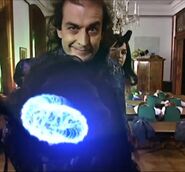 The Witcher, followed by Alexa, uses his magic finger to search for Tom