Villains Wiki
Register
Don't have an account?
Sign In
Advertisement
in: Mature, Call of Duty Villains, Anarchist,
and 51 more
English

The Wolf (Call of Duty)

Al-Dayib
True Soldier (by himself)
Old Man (by Farah)

Use Al-Qatala to commit a series of terrorist attacks across the world to remove any kind of foreign power from countries and free the people from it (failed).

Free Urzikstan from General Barkov via terrorist acts (succeeded; but not in the way he intended).
Kill anyone and destroy anything that opposes his plans (failed).

Omar Sulaman, also better known by his moniker The Wolf, is the secondary antagonist of the 2019 video game Call of Duty: Modern Warfare.

He is a powerful terrorist and the founding leader of Al-Qatala, and is hell-bent on removing any kind of foreign power from countries around the world via various types of terrorist attacks, mainly to free his home country Urzikstan from General Barkov's control and give independence to his people worldwide. His plans lead him into conflict with the C.I.A., Urzikstan Liberation Force and S.A.S.

He is voiced by Joel Swetow in motion capture.

Before he became known as "the Wolf", Omar Sulaman was born in the Middle-Eastern country of Urzikstan, in which his father had built a pretty successful construction company but was forced to provide low-cost bids for relations of royalty, religious leaders, military and government. As a young man, Omar witnessed this rampant corruption and hypocrisy with disgust, motivating his anger and planting the seeds of rebellion in his unruly soul. Establishing his own independent presence, Sulaman erected intensive training camps across the Middle East.

Following the invasion of General Barkov and his rogue Russian army, Omar once became a freedom fighter, having previously worked with Captain Price, later becoming a leader and a hero in the eyes of the Western world. He had given up a life of relative comfort to fight Russian influence in Aghanistan and was a key ally to Western forces in the region. However, he grew intolerant of the intervening political and military leaders' lack of willpower. In contrast to terrorist factions who promote religiosity and strict doctrine, Sulaman is different; calling for actions that favor anarchy over institution.

Over the years, Omar had achieved a rich variety of resources and became one of the world's greatest terrorist leaders after he founded the independence terrorist network known as Al-Qatala in 2013 and he took up the name of Aldhiyb, better known as "the Wolf". He currently leads it to bring down government establishments by any means necessary. He also leads terrorist attacks in Urzikstan in his own attempt to liberate it from Barkov's oppressive control. Since becoming the Wolf, he hasn't been seen anywhere in public for several years, and yet maintained several houses across Europe and Asia to hide in.

The Wolf and his second-in-command Jamal "the Butcher" Rahar are first seen recording a video footage message to an Al-Qatala cell in the United Kingdom before they lead a terrorist attack on Piccadilly Circus in London. The attack was stopped thanks to S.A.S. and the Metropolitan Police Service, who had gotten intel on it before it happened. Despite this, many innocent people, including children, were killed in the process.

After S.A.S. led by Captain Price and Sergeant Garrick intercepted the cell's hideout in Camden, they learned where in Urzikstan the Wolf was located: Rammaza Hospital. The Wolf was inside the hospital and Al-Qatala had taken over it, where he was doing another video footage with captured American soldiers, planning to execute them. However, he was intercepted and captured by "Alex" and the Demon Dogs before he could achieve that, before being taken to the U.S. Embassy.

At the Embassy, the Butcher leads Al-Qatala outside, demanding the Wolf be released or they come and get him. The Wolf claims that he didn't steal the chlorine gas and that his men will free him. After he was moved to the Ambassador's residence, his words rang true as he was successfully broken out by Al-Qatala while "Alex", Farah, Hadir, Price and Garrick fought off against enemy forces. The Wolf and Butcher are later seen meeting with Hadir, who formed an alliance and gives them the gas, which they planned to use to remove foreign power across the world, starting with Russia. Hadir wanted to personally kill Barkov and destroy the gas factory himself.

The Wolf retreated to his underground teahouse when the S.A.S. and C.I.A. worked together in a joint operation to capture him. As Farah and "Alex" head down the tunnels after being separated from the group, they fought through Al-Qatala forces while being confronted by Hadir, who claimed that Al-Qatala were their allies. When "Alex" and Farah were separated, the Wolf talks on the speaker as the CIA operative fought enemy fighters lighting the shafts on fire. The two reunite and find the Wolf wearing a bomb vest that was counting down, and they defuse the bomb after they kill him, and his body was later bagged and taken back to base.

After his death, the Butcher was later captured by Price, Garrick and Nikolai for information on Hadir's location, in which he gave them the location of Barkov and his gas factory that they later use to defeat and kill him once and for all, ultimately liberating Urzikstan. Al-Qatala remained functional after its leadership was taken up by Khaled Al-Asad, who transforms the network into a military-powered army and invades Verdansk, Kastovia as revenge for Barkov's crimes in Urzikstan.

Even before becoming the terrorist figure he is, Omar Sulaman has been known to the world as a massively large key figure in the world of freedom warfare, being seen widely as a great hero across the Western World. Giving up on a life, Sulaman had seen he is being loved, so, he carried out a defence attack in Afghanistan against Russian influence.

Following this incident, Sulaman has grown himself to become an extremely cold, ruthless, manipulative and above all powerful individual, mainly in the world of terrorism, and, aiming himself of pursuing independence across the globe, seeking on using the Al-Qatala organization he had started in order to remove the world from any kinds of foreign power, yet wanted freeing his people in Urzikstan from General Barkov's influence and invasion.

Following these events; Sulaman had dedicated the rest of his entire life for doing so, using the organisation to create conventional terrorist attacks, killing dozens of citizens (even in Urzikstan) ,including children in the process, implying how extremely cold and "ruthless" he truly is. Yet, he is not seeing himself as a monster nor a villain, considering himself as a hero and considers the others he "fights" against as enemies and villains.

It is extremely important to remember that the Wolf is having understandable motives and goals, thinking on only the greater good of the people of the world. Despite not being connected nor associated with Barkov, he does sharing somewhat similar goals; as they are both desiring on freeing their own people.

The Wolf giving a speech in the opening of Call of Duty: Modern Warfare, moments before his insurgents commit the terrorist attack in London.

The Wolf being captured by Demon Dogs and "Alex". 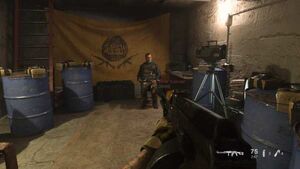 The Wolf armed with a bomb vest, being confronted by "Alex" and Farah Karim. 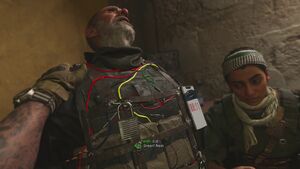 Farah and "Alex" disarming the bomb on The Wolf's corpse.