The Wolves are a mysterious group of survivors who appear in Season 5 and Season 6 of the TV series The Walking Dead. Not much is known about them, only that they are responsible for the massacre at Shirewilt Estate. They make their debut in the Season 5 finale by attacking Morgan Jones, killing an innocent man to cause him to turn, and luring walkers into freight container in order to attack Alexandria. They are the main antagonists of the first half of Season 6 and appear to be the TV series version of The Scavengers from the comics.

They have a habit of killing people and carving the letter "W" on their foreheads as well as spray painting their "Wolves not Far" tagline wherever they go.

Some time after the outbreak, these survivors started to scavenge around the D.C. area, killing and luring other survivors into traps, taking all of their supplies, carving the letter "W" on their heads, and using them as bait after they turn. They also draw a "W" on their own heads.

Around the time between Noah's arrival and departure from Grady Memorial Hospital, the Wolves attacked Shirewilt Estates, killing many of the inhabitants. They also mutilated several of them to add to their collection of walkers for their numerous traps.

As Morgan camps on his way to Washington, D.C., Owen, the leader of the Wolves, approaches him, threatening to rob and kill him. When Morgan resists, Owen's partner, Edward attacks him from the woods. After winning the fight, Morgan locks them up inside the car he was sleeping in it and honks the horn.

Sometime after escaping, they captured and killed the Red Poncho Man that Daryl Dixon and Aaron  were tracking earlier, leaving him to turn. Owen finds Aaron's bag and photos of Alexandria that he accidentally left behind at the trap they set. The group then presumably plans to attack Alexandria.

Shortly after Morgan Jones's arrival in Alexandria, Daryl tells Rick about what he and Aaron found at the Del Arno Foods truck lot, saying that Morgan came across two men with the letter "W" on their heads. Rick confirms that Morgan had mentioned the incident, and, worried about the safe-zone's security, Rick mentions that the scouting missions for other survivors should stop, to which Daryl objects.

A few days later, while Rick and his group are away, trying to lead a massive herd of Walkers away, at least a dozen Wolves attack Alexandria with hand-held weapons and fire-bombs. They kill the guards, scale the walls and slaughter numerous residents in the safe zone. They begin the same process of butchering and looting that they had done at Shirewilt, dismembering their victims, and raiding the houses to steal valuable supplies.

With the Alexandrians fighting back, a Wolf attempts to drive a large truck through the safe-zone's gates, but the driver is killed by Spencer Monroe before this can occur. Instead, the truck crashes just outside and the blaring horn begins to attract a massive herd of walkers in the vicinity. Carol Peletier is able to disguise herself as a member of the Wolves she killed earlier called Aphid, and proceeds to single-handily kill at least six of them. One is gunned down and killed by Carl, saving Ron Anderson. Another is killed by Rosita Espinosa after he fatally injured Holly, and two more are killed by Rosita and Aaron after looting some of the houses. Morgan is confronted by the blonde wolf he previously encountered outside Alexandria. He and 4 others surround Morgan, but are fended off. Morgan tells the Wolf that he and his companions will die if they continue to choose their savage way of life. He rebuffs Morgan, claiming that they "didn't choose", before turning and leaving along with the other surviving Wolves. Owen, the Wolves leader, is left behind, and hides in one of the houses. Morgan finds him, and after a small struggle, the Wolf is knocked unconcious by him.

Following the attack on Alexandria which was successfully repelled, only six wolves are known to have survived, the five who were fenced by Morgan, and escaped, and their assumed leader, kept as a hostage by Morgan.

After fleeing from Alexandria, two Wolves attack Rick while he is stopped on the roadside in an RV. After a brief struggle, Rick manages to kill them both. Rick notices in the RV's front mirror that other three Wolves who fled the safe-zone are quietly approaching the RV and he, in a fit of fear, unloads an entire magazine in the RV's wall, killing the three of them.

Currently, the Wolves Leader is the only member of the group confirmed to be alive. He is secretly being held prisoner at Alexandria by Morgan. Wounded with a deep cut in his torso, he vows to Morgan that he will kill him and everyone else there if he doesn't die from his injury.

Owen turns into a zombie and Morgan kills him. 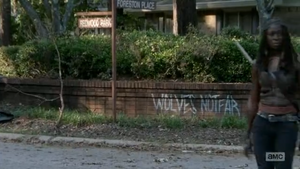 The first sighting of The Wolves' graffiti 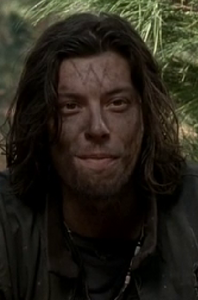 Owen, The leader of The Wolves.