Hunting, skilling and skinning her victims.

The Woman is the titular character of the horror novel The Woman by author Jack Ketchum and the 2011 film adaptation of the same name which is also a sequel to the 2009 horror movie The Offspring. She also serves as the main antagonist of the non-canon short story The Cow.

The Woman was originally apart of a cannibalistic tribe that terrorized the forests of Maine, only to then be wiped out by a police force. Sometime later, Chris Cleek, a country lawyer, discovers her while hunting in the woods, kidnaps her, and holds her captive in his fruit cellar. Under the guise of civilizing her, Cleek takes the opportunity to molest and freely dominate the feral woman. Brian, Cleek's son, eavesdropped on his father as he was raping the Woman, and he tries to do the same the next day. During this time, the Woman seemed to realize that Peggy was pregnant, but it's never explained as to how she could've possibly known. The Woman is also made to wear dresses so that Chris could live out his depraved fantasies.

Eventually, Peggy frees the Woman, and she takes her revenge on Cleek, and his wife and son. The Woman attempted to also eat Darleen, Peggy's sister, but she was spared when she was offered a water bottle. She then takes Darleen, and her eyeless sister into the woods with her. Peggy hesitates at first, but she eventually follows them as well.

In this non-canonical edition of The Woman, Donald Fischer, a member of a theater group, is taken captive by the feral woman after she had massacred the entirety of his theater coupe. Seeking to rebuild her cannibalistic tribe, the woman subjects Donald to piercing as a means of not only establishing ownership, but also to make him more sexually productive. She also functioned as a mother figure to the girls. 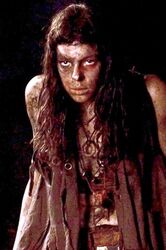 The Woman
Add a photo to this gallery

Retrieved from "https://villains.fandom.com/wiki/The_Woman?oldid=2611898"
Community content is available under CC-BY-SA unless otherwise noted.