Buy a new house (succeeded, but her new house gets destroyed).

Kill the house pixie for humiliating her (succeeded).

The Woman (whose real name is Jane) is the main antagonist from the 2010 French computer-animated short film Lutins. She is a very haughty, scornful and contemptuous woman who has just bought a wooden cottage, without knowing that it has its own house pixie.

She was voiced by Emma Thompson, who also played Sarafine Duchannes in The Caster Chronicles, Karen Eiffel in Stranger Than Fiction, The Yeti Elder in Missing Link, and Lesa in Hoodwinked!.

On her first visit of the cottage, the woman notices a house pixie who turned himself into wood in the hall. Deducing the "sculpture" is not in at all, she throws it into the rubbish bin. However, the disappointed pixie returns to the cottage through its walls and floor which he can become part of. After the woman ignorantly messes up some items, the pixie uses his ability of moving with house equipment to scare her a little bit. When she falls down, he reveals himself to her and wants to help her to stand up.

Unfortunately, the angry woman immediately kicks the wooden stair banister, unwillingly hurting the pixie and causing him to flee. She starts chasing him, only to fall down when he forces the stairs to disappear. In the living room, he makes her feet to fall down into the floor, nailing her to one place. He then shows her all of his forceful powers that he uses to move with the cottage. Although she is scared and pusillanimous, the pixie actually does not mean to frighten her, but only to tell her not to fight him.

After that, he hopes they would eventually be friends. However, she then grabs a fire iron instead and tries to cut herself out of the floor. When she realizes it is hurting the pixie, she continues with cutting the floor. The injured pixie fearfully tries to escape from her by crawling away, but it only provokes her to be more savage, violent, murderous, and destructive. The woman takes an axe and keeps cutting and hitting everything wooden in the cottage, slowly following the pixie outside. Finally, she hits the pixie himself and finishes him. However, it also causes the cottage to break down, as the house pixie is nowhere to be seen.

The woman does not regret it very long and soon gets a new, modern house with its own house pixie. Unfortunately, she mistakenly hits him with a golf club, destroying the pixie and her new house.

The Woman is a selfish, arrogant, scurrilous, vituperative and deceitful person who likes to buy a new house and kill the house pixie for humiliating her. Despite her loathsome and villainous nature, she is very self-motivated and enthusiastic when she playing golf. 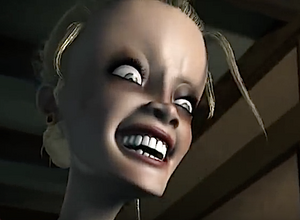 The Woman's evil laugh.
Add a photo to this gallery
Retrieved from "https://villains.fandom.com/wiki/The_Woman_(Lutins)?oldid=3780288"
Community content is available under CC-BY-SA unless otherwise noted.