Kill and cannibalize as many children as possible.

The Woman to Eat The Children is the main villainess from the Creepypasta story of the same name. She appears to be a pale skinned blonde cannibal with brown-eyes that would eat children in various disturbing ways.

With no known name or past, her parents possibly left her on the streets to survive all by her self. It is very possible that she was just born extremely poor, and was forced into cannibalism in order to survive.

One day, a boy looked directly into the woman's eyes. With hunger consuming her, she began to eat the helpless child, beginning at his cheek and digging her nails into the unlucky boy's face. Then she rips off a large hunk of skin starting from the cheek, before using her knife to put the boy out of his misery. Presumably, she eats his corpse after.

After she cannibalized the innocent boy and she accidentally dropped a piece of paper on the streets. While an archaeologist has been investigating into the situation, trying to find as much information as he can about the woman. He couldn't find anything until he found the paper on the streets. On the paper a man by the name Mark Traw, is explaining his side of the story on the news, that she eaten his three-year old daughter.

After Mark said his story, the woman tracked Mark down. She ended up eating his flesh for revenge of reviewing her to the public. Mark's body has been found along the streets the next day. 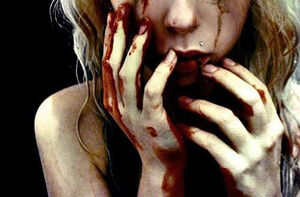 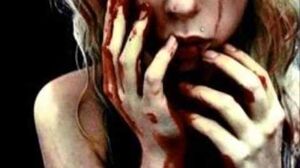