Zec Chilovek, also known as "Prisoner Human Being", or "The Zec", is the main antagonist of the 2012 action-thriller film Jack Reacher. He is the leader of a gang masquerading as legitimate businessmen and responsible for the assassination of five random people.

He was portrayed by the legendary actor and filmmaker Werner Herzog, who also portrayed The Client in The Mandalorian.

He spent much of his life in a Soviet Gulag and is known only as the Zec (prisoner). He is responsible for the deaths of five people and tries to blame former U.S. Army sniper, James Barr. While interrogated by the District Attorney, Barr tells him to find Jack Reacher, knowing that Reacher would be able to uncover the truth. Reacher meets Barr’s defense attorney, counselor Helen Rodin, the District Attorney’s daughter, who's been saddled with the apparently hopeless task of saving Barr from the death penalty.

After finding irregularities in the killings and investigating further, Reacher and Helen find out that the owner of a local construction company was the intended victim while the other victims served as a cover-up. Reacher is later attacked in a set up bar fight. After Reacher defeats all assailants, one manages to flee and meets with The Zec and his right hand man Charlie, the latter being the real assassin. Furious about the botched attempt on Reacher's life and other mistakes the henchman made earlier, The Zec reveals his backstory to the man, including that while in the gulag he bit off his own fingers to avoid working in the sulfur mines. Stating that a man this rare could always be of use, The Zec offers the henchman to spare him if he proves his rareness and bites off the fingers of his left hand. However, the henchman is not able to. While Charlie executes the man, The Zec wonders why people would choose the bullet rather than life, compared to the lengths he went to ensure his own survival.

Knowing that Reacher is about to uncover everything, The Zec's men kidnap Helen with the aid of Detective Emerson and hold her hostage at a quarry. Reacher outwits the mob guards including Charlie, killing them with the help of Cash, a former marine, before confronting the Zec about the conspiracy. Zec points out that Reacher has killed most of the witnesses against him and doubts that he would be convicted. In the interest of justice Reacher shoots the Zec in the head on the spot, killing him. 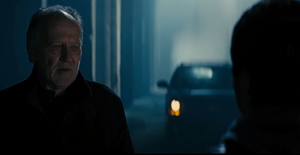 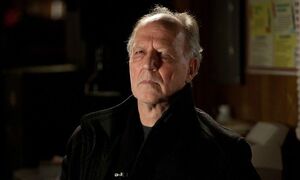 Zec about to meet his death.