Fighting his enemies with honor.

Thel 'Vadam, formerly known as Thel 'Vadamee and more commonly known as The Arbiter, is the deuteragonist of the last two games in the original Halo trilogy. He was a Sangheili who served the Covenant Empire but ended up being betrayed by the Prophet Hierarchs which led to him to form the Covenant Separatists and ally with the UNSC.

He was voiced by Keith David.

After glassing Reach and failing to protect Installation 04, the Prophets stripped him off his rank of Supreme Commander and made him the new Arbiter of the Covenant Empire. His first task was to assassinate the Heretic Leader, Sesa Refumee, at the Gas Mine on Threshold. After fighting through the first part, The Flood managed to infiltrate the Gas Mine but Thel eventually confronted Refumee. After a short battle, Thel killed Sesa and claimed he had no choice but to kill him. The Prophets gave Thel his second task: Obtain the Index which is located at the Quarantine Zone. Thel was dropped off at Installation 05 and traveled to the Quarantine Zone with the assistance of SpecOps Commander Rtas Vadum and his Elites. But when he reached and obtained it, Tartarus smashed the Arbiter off the edge and informed him that he and the Elites have been betrayed. Gravemind saved the nearly dead Arbiter and sends him to Installation 05 where he predicts the Index is. With the help of UNSC marines and Elites, Thel confronted and eliminated Tartarus to stop the Brutes from activating the Installation.

Thel formed the Covenant Separatists as it's leader and fought the Covenant on Earth with the UNSC including John 117. Thel along with the others went to Installation 00 and he and the Elites disabled the Second Tower of the Barrier. After fighting through many Covenant forces, Vadam assassinated the High Prophet of Truth which ultimately ended the Covenant Empire. Thel finally helped John 117 destroy Installation 00 and was present during the funeral of fallen UNSC soldiers and officers, he then left and went to Sanghelios along with the rest of the Elites. Thel then formally formed the Swords of Sanghelios. 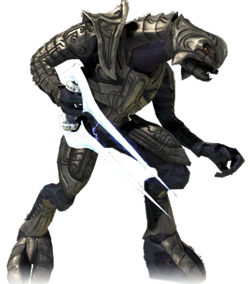 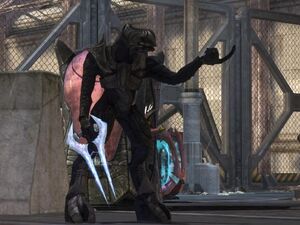