Villains Wiki
Register
Don't have an account?
Sign In
Advertisement
in: Mature, Attack on Titan Villains, Manga Villains,
and 62 more

General of the Marleyan military

General Theo Magath is a major antagonist in the anime and manga series Attack on Titan. By the time of the story's beginning, he is the commander of the Eldian Unit, including its subdivision Warrior Unit, under the Marley army, and previously one of the chief overseers of the first Warrior candidates during their training. Later in the story he becomes the General and top executive leader of the whole Marleyan military, after his predecessor General Calvi's death due to Eren Yeager's attack on Liberio. Magath was appointed in office through the support of Marley's supreme leader Willy Tybur and Marley's governmental party.

He is voiced by Jiro Saito in japanese and by Neil Kaplan in english.

Theo Magath is a stern, hardened, no-nonsense military official whose top priority is keeping Marley as the world's dominant power. He is well respected and trusted by his subordinates. Despite feeling empathy for the civilians unfairly involved in Marley's wars, Eldians included, Magath is still extremely dutiful, and most of his personality and choices revolve around what he believes being his duty as a soldier of his nation. Despite this, he personally wished for the Marleyans to change its self-destructive ways of imperialism and militarism and personally despises war, having witnessed it first-hand. He can act imposing and controlling even to people who are not soldiers of his military. He is not afraid of criticizing his nation's flaws and love for power and is unhappy with its blind reliance on the power of the Titans for war campaigns in the age of modernization. Because of this, he plans to start a new policy for his country that forbids the use of Titans for any war, using only human strength and technology instead.

Magath has no desire for power and is not interested in continuing Marley's imperial conquest. He is however obedient of his duty regardless if he has to commit immoral acts or not, and followed everything Lord Tybur asked him to do. He accepted the fact that he was going to inherit Calvi's role as the General of Marley's military government more out of a sense of duty to his nation's supreme leader and homeland than personal desire, even though Willy had presented it as an offer instead of an order. He even states that the military does not belong to him, but the nation itself. Magath has no qualms about sacrificing human lives, both soldiers and civilians alike, out of duty and for a cause seen for a greater good. In order to achieve victory, he is willing to commit war crimes and ignore international law, especially if it saves the lives of 800 soldiers. Magath claims that a war crime is fine, as long as there are no witnesses left to report it. Magath is also a very cunning and perceptive individual, managing to figure out the Tybur family is secretly ruling Marley, and seeing through the country's deceptions in the various forms of propaganda. He is considered a cautious person and a harsh critic, who can also speak sometimes with a certain level of dry wit. Upon looking at a statue of the Marleyan hero Helos, he states it is the true spirit of Marley, due to it being completely hollow.

While he normally never brings his personal emotions in his job, Magath can become less rational when taken by feelings of revenge. He takes Zeke Yeager's betrayal as a personal offence and is clearly agitated by it, failing to keep a level-head while engaging him in a shootout and insisting that he will punish Zeke himself. He also loses self-control and gives in to wrath once he learns that his homeland Marley might get wiped out completely and takes his anger on Zeke's most devout follower, Yelena, whom Magath tortures in a fit of rage as he blames her for the alliance between Zeke and Eren Yeager and correctly guesses she gave him knowledge of some locations of the Marleyan continent.

Though he holds the same prejudices against Eldians that most of the Marleyans do, Magath is shown to be more tolerant of them than others, willing to take advice from Zeke and grant special permissions to Gabi if it means securing victory. He is concerned for the Eldians living in the Liberio internment zone, although he will not shy away from reminding them their place in the world when they dare question his orders. He also agreed with Willy Tybur's plan in baiting their enemies in raiding Liberio from the internment zone, even if it meant putting the lives of the Warrior candidates on the line, both Udo and Zofia dying in the process of the surprise attack. Despite this, he shows genuine concern not present in other Marleyans, noted when wishing a safe return to the Warriors children Marcel, Reiner, Bertholdt, and Annie, who were leaving for the Paradis Island Operation. He is shown to care deeply for the child Warriors, especially Gabi, and views Pieck as one of Marley's most valuable soldiers. He trusts Pieck a lot and often observes her intellectual and tactical abilities. Despite the recent betrayal of Zeke, Magath trusted her so much that he personally went with her to fight both Zeke and Eren within Shiganshina instead of sending a soldier in his stead. Despite this, Magath continued to view the Eldians on Paradis as enemies of Marley and Eldians overall as lower class citizens until just after the Rumbling occurs. He still wished to save Marley, but acknowledged that the crimes of the older Eldian Empire should not be forced upon those currently living on the island and that the Eldians in Marley and the rest of the world should not suffer so much hatred for the sins and wars of both Eldia and Marley. 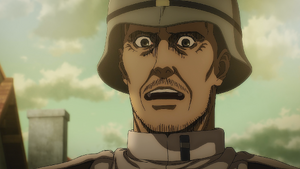 General Magath in battle uniform, leading his troops on Paradis. 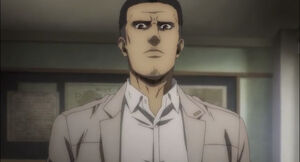 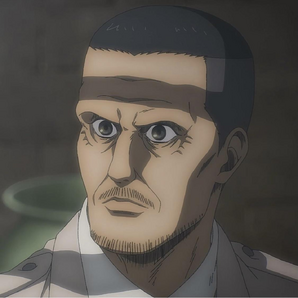 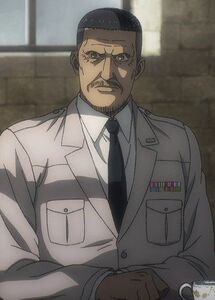 Commander Magath seated with his General. 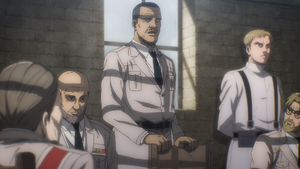 Magath, Zeke, Colt, and a few executives of the party in a meeting with General Calvi below Fort Slava. 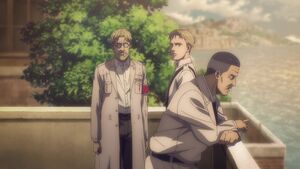 Magath with Zeke and Colt. 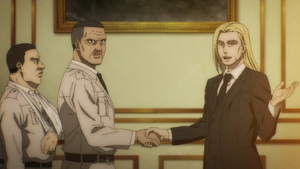 Willy Tybur greets Magath and Koslow and introduces them his family. 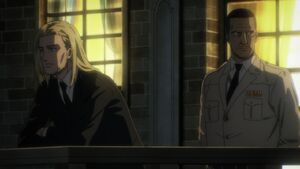 Magath and his guest Willy Tybur in Liberio. 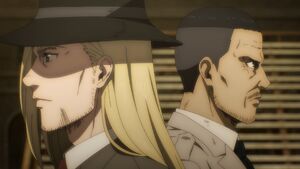 Magath and Willy Tybur plotting the assassination of leaders of their nation. 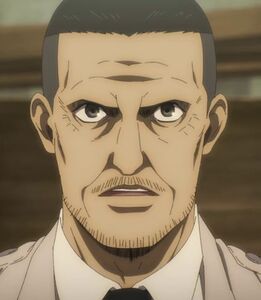 Magath tells Tybur there are moles and traitors within the military and the country. 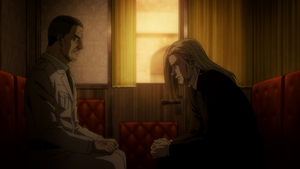 Magath and Tybur discussing their plan to have the rest of the world join Marley's cause. 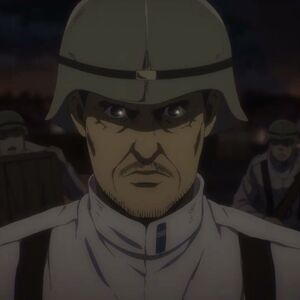 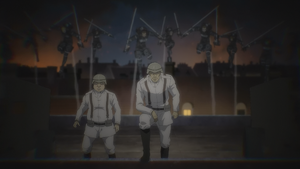 Magath and Koslow are ambushed by the Survey Corps. 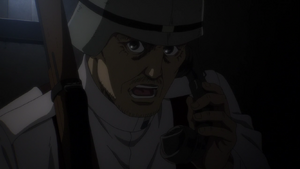 Magath calling for reinforcements from the Marley army and navy during the Raid on Liberio. 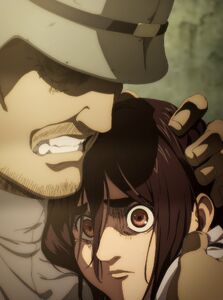 Magath reunites with Gabi in Shiganshina District, one month after the Raid on Liberio. 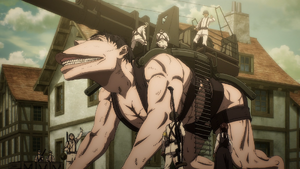 General Magath with his troops, Pieck, Colt, and Gabi, preparing for the Revenge for Liberio. 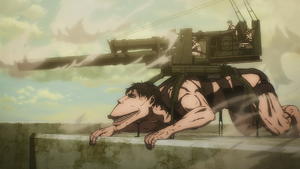 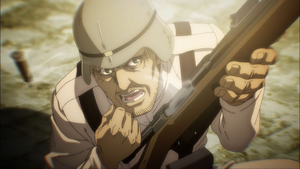 Magath shooting at Armin and Mikasa. 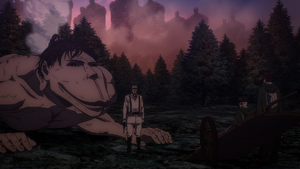 Magath and Pieck meeting Hange and Levi during the Rumbling. 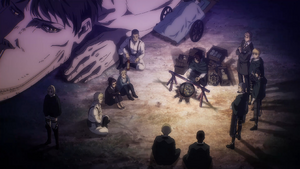 Magath with his comrades, glaring at his new allies wanting to save Marley and the rest of the world. 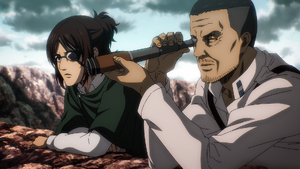 Magath and Hange observing the Yeagerists at Paradis' sole port. 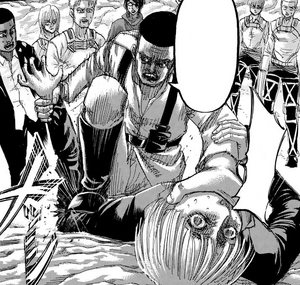 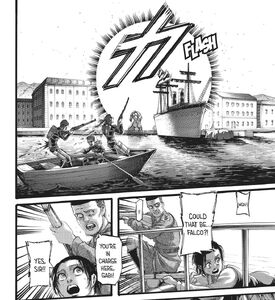