Enjoys watching movies and having tea on occasion.

Enjoys having trips to the library and the local art museum

Prove himself to be smarter than WordGirl.

He is a rather sophisticated boy genius bent on proving himself an intellectual match for WordGirl. He also has a not-so-subtle crush on her due to her intellect, though the feelings are not mutual.

He was voiced by Patton Oswalt, who also played Professor Dementor in Kim Possible, Nom Nom in We Bare Bears, Randall Tugman in Dead Rising, TV's Son of TV's Frank in Mystery Science Theater 3000: The Return, and the Lilliputtians in Gravity Falls.

Tobey is a boy genius who specializes in building enormous robots. His robots seem to be built for mostly destructive purposes, but have shown a wide array of abilities, such as: food-making, cabin-building, Checkers-playing, painting, competing in athletic events, and many other examples. Tobey is cunning, sophisticated, pompous, greedy, ruthless and manipulative; he often comes across as reckless, unpleasant and mischievous, though he can also be absentminded in his robot designs as his plans are sometimes foiled through robots malfunction.

He is also shown to be an antisocial person, as when seen at school he is usually keeping to himself or working on his robots, though he has been seen talking with Victoria Best in the background every now and then. He has also been shown to be vengeful as he tends to throw fits when things don't go his way or he feels wronged. An example being in "Trustworthy Tobey" where he tried to destroy the library because Becky (accidentally) lied about him not returning her book to her, thus making him unable to check out any book he wanted. Though he can just as well be petty to a degree as he went on a TV station-destroying rampage simply because he felt their programs were 'insultingly fake'.

He is also shown to be very egotistical and confident in his abilities to handle any task, even if said task is outside his range of capabilities, such as painting or some sort of athletic activity, though (when confronted with the fact he can't do the task at hand) he usually dismisses said task as beneath him and has his robot do it and take credit for it. Whenever he loses though or is properly discredited for not doing said task, he goes into a fit of rage and usually has his robots attack whatever bruised his ego.

Unlike most villains on the show, he doesn't want to see WordGirl dead, just bested, and he doesn't hate her (quite the contrary actually, as he has a crush on her), he just wants to prove that he's smarter than her, as the show implies he has some deep-rooted self-esteem issues such as crying when he lost a game of checkers (though he was a younger child, but when he remembered the event he cried again in the present day) and when he completely broke down when WordGirl and Miss Power started to insult and mock him and ultimately called him a worthless failure.

Theodore also has an obsessive crush on WordGirl - though he would never admit it and has argued more than once to the contrary - and often concocts destructive and dangerous plans to impress her or win her heart. His crush is rooted in the fact that WordGirl is highly intelligent, something he respects and admires. When he does, however, get her attention, he tries his best to make small talk with her and be more appealing, which works to some avail. Tobey also has a scrapbook with WordGirl news clippings and other miscellanea. Though WordGirl and Tobey are at odds a lot, they occasionally show that they have some compatibility, such as in the episodes "Have You Seen the Remote?" and "Book Ends" due to them having common interests and them both being highly intelligent kids, though Tobey's immature and villainous ways usually get in the way of the two forming any kind of bond.

Tobey in his work get-up. 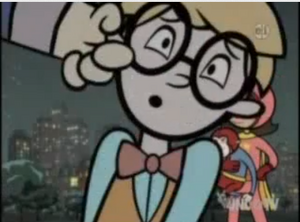 No book for Tobey! 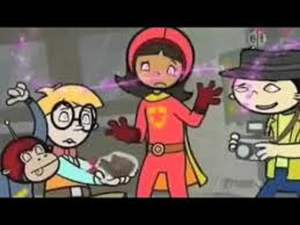 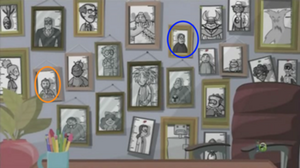 Tobey's portrait seen with portraits of the other villains 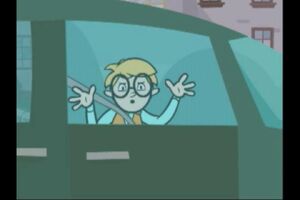 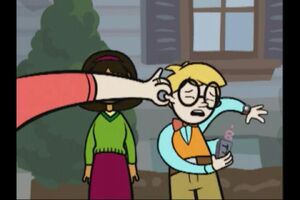 Tobey getting dragged off by his mom. 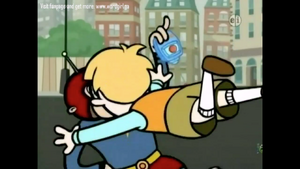 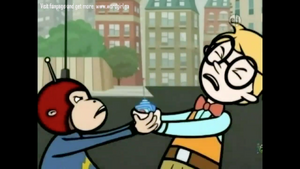 Captain Huggy Face and Tobey fighting over the remote 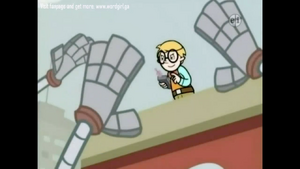 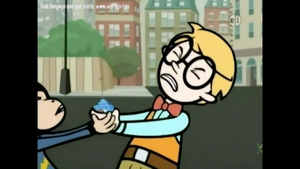 "Would you get banana loving!" 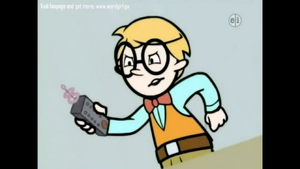 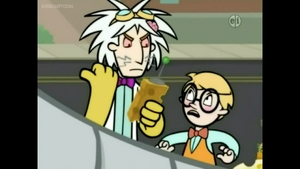 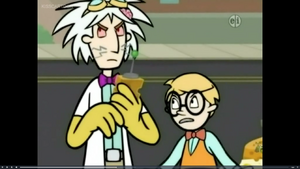 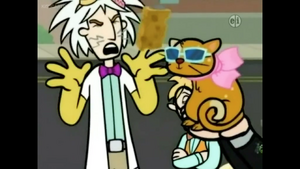 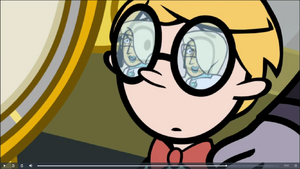 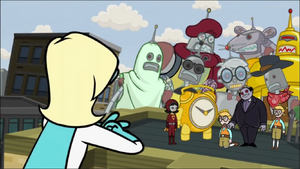