Theresa Fowler is a recurring Character in the Disney series "Randy Cunningham: Ninth Grade Ninja" although normally a good character (it even implied she has a crush on the protagonist) every so often she falls victim to The Sorcerer's Stank magic. She is Randy Cunningham love interest.

She was voiced by Sarah Hyland.

So You Think You can Stank

In this episode she competed in the talent contest, however her performance was very rudely insulted by Howard along with the others. Overcome with humiliation, she became the victim of the Sorcerer's stank, and was turned into a monster upon the stank exposure. She went on a rampage, Randy took her on, and managed to turn her back to human.

Following Randy accidentally revealing the secret of turning into a monster, Julian quickly took advantage of this, by exposing an embarrassing secret about her (which implied once taste something that highly disgusting), overcome with humiliation and sadness, she was turned into a monster. She went on rampage, kidnapping the principal of Norrisvile, as he had canceled the baton twirling team which she loved(which serves as secondary ). Randy took her on and managed to turn her back to normal, along with the reminder of the Der Monster Klub.

Following her (and the rest of the team) loosing the annual chess tournament to Hannibal McFist's chess robot, overcome with grief and anguish at losing, she (along with the rest of the team, and several other students) was transformed into a monster. In this form she went on a rampage, Randy managed to temporarily stop her, along with the other monsters, however and she was changed back to normal, when Howard defeated the robot.

After heart broken by Nomi-Randy, (who she believed was real Randy) once again fell victim to the Sorcerers Magic and was once again turned into a monster. Overcome with fury, she chased after Heidi Wienerman trying to kill her for revenge. She was turned back to normal, when Randy, dressed as the Ninja gave her a bouquet of roses, claiming they were from Randy to say he was sorry. This is the only known circumstance when her behavior pattern match that of rampaging Yandere.

Though technically not under conventional stank influence, Theresa ended up taking an antagonistic role alongside Norrisville citizes except Randy and Howard due to drank the contaminated water and is brainwashed by Evil Julian: After Howard wasted one of the Chaos Pearls' dark powers (which the pearl's dark powers revealed to be stored inside the pearl in the liquid form), he accidently dropped the pearl to the street where it eventually crushed under their school bus' wheels. With the pearl crushed, the very small amount of the pearl's liquified dark powers poisoned the sewers and later, the city's power supply. Due to the dark magic poisoning on the water is supernatural in nature, it remains undetected until it's too late. One by one, Norrisville citizens whom drank the contaminated water fall under the dark magic influence and later fall into Evil Julian's Under Control. This includes Theresa, whom later goes to Randy's room much to his awkward due to the fact that she was a girl whom supposedly not entered a boy's room. She demaned Randy to give her the ball, but Randy awkwardly denies, resulting her attacking him. He eventually forced to locked her into his wardrobe until the end of the episode where after Evil Julian absorbs the dark magic influence that corrupt their mind, Theresa' corruption ws undone and she was changed to normal. 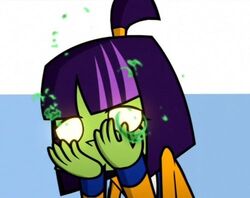 Upon the stank exposure, the process began where her skin became green, while her eyes would glow in yellow before popping out like crabs', just like other stanked victims.

Theresa's monster form, resulting from the stank exposure.
Add a photo to this gallery

Retrieved from "https://villains.fandom.com/wiki/Theresa_Fowler?oldid=4331437"
Community content is available under CC-BY-SA unless otherwise noted.