Guardian of the Steeds of Time

Guarding the Steeds of Time.

Guard the Steeds of Time.

Theseus is the major antagonist in the video game, God of War II. He is a loyal guardian toward the Sisters of Fate.

In order for Kratos to use the Steeds of Time, he had to find a device that could open a certain door. It turns out that Theseus has the device on his gauntlet. When Theseus encountered Kratos he laughed out loudly because the rumor of Kratos being a Fallen God was true. When Kratos told Theseus that he seeked the Sisters of Fate, Theseus denied his request and challenged Kratos a fight to the death, thinking that he was a better fighter.

Theseus fights with a giant double-ended spear, that grants him the ability to shoot out iceballs and created ice-like pillars.

When he retreats to the top of the gate, he shoots out the iceballs and creates the Ice Pillars more often. He even summons two minotaur's to help him fight Kratos.

After Kratos deals enough damage with his Typhon's Bane, Theseus slips off the roof, giving Kratos the opportunity to kill Theseus and get the Horse Keeper's Key.

Theseus is a Demigod, so he has great physical strength and stamina. He is skilled with a double-ended spear. His Double ended Spear can generate multiple ice balls out of the tip, and ice spikes/towers out of the ground. He also has the ability to summon two minotaur's to help him kill Kratos. 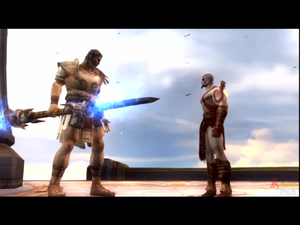 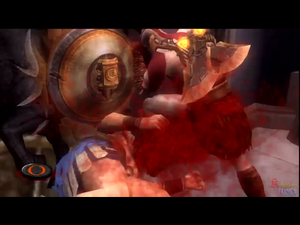 Theseus being killed by Kratos.