Thief King Bakura is a villain in the Yu-Gi-Oh! franchise. He is a sadistic thief who will kill anyone to get the Millennium Items. During an unknown point in time, he sealed his soul in the Millennium Ring, along with a shard of the soul of Zorc Necrophades. Both souls then merged together, and Yami Bakura was created. He is the ancient Egyptian incarnate of Ryo Bakura. 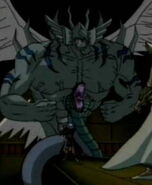 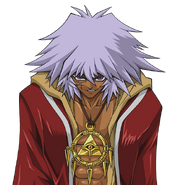 Add a photo to this gallery
Retrieved from "https://villains.fandom.com/wiki/Thief_King_Bakura?oldid=1282130"
Community content is available under CC-BY-SA unless otherwise noted.