Egotistical Mastermind
The Thinker is the alias of four villains from DC Comics. They are primarily enemies of the superhero known as The Flash. The original Thinker, Clifford DeVoe, was the arch-villain of Jay Garrick, the first Flash, and was the central antagonist of Jay Garrick's Flash series.

Clifford DeVoe was born in Keystone City in 1910. Showing intelligence from an early age, he eventually found employment as a DA. However, in his first major case against mob boss Hunk Norvock, DeVoe was stumped when the defense put a young woman on the stand, and he withdrew his case rather than offend the jury by harshly questioning her. This failure, coupled with the knowledge that crime could be made to pay, drove him to alcohol. Visiting Norvock while drunk one night, he offered his services as a "thinker" - a preparer of alibis and legal precedents to keep his organization out of jail. Norvock gave him a house and a stipend and he set to work.

For a decade, Clifford DeVoe worked anonymously, until two of Norvock's underlings threatened to implicate him in major crime to the police. On Norvock's prodding, DeVoe infiltrated the police station in a police uniform, stole the evidence and killed the two lieutenants. However, this made Norvock paranoid that DeVoe planned to replace him. Going to his house to kill DeVoe, Norvock was tricked into shooting a reflection in a steel mirror. The bullets ricocheted, killing him. The police ruled a suicide, and the Keystone City underworld fell into disarray... until a coalition of senior bosses chose DeVoe as their leader, citing his previous work. Taking the alias "The Thinker", DeVoe set to work.

The Thinker was first imprisoned by the Flash, which drove the two men to become mortal enemies. He always sought out new scientific devices to use and his most important was the "Thinking Cap," a metal hat that could project mental force. The Thinker would use this device repeatedly over the years.

The Thinker was a member of the Injustice Society, and, together with the Fiddler and the Shade, he was the man behind the decades-long "abduction" of Keystone City and the original Flash, after which he was defeated by the Flashes of two eras. His "suspended animation-time" in Keystone kept the Thinker young over the years, and he continued his criminal career in modern times.

In recent years, however, DeVoe accepted a mission with the Suicide Squad in exchange for a full pardon. Although he was seemingly killed by the Weasel during this mission, he survived and made his way to Keystone City. He reformed, dedicated his life to good works, even becoming friends with his former nemesis Jay Garrick. However, he developed terminal cancer, apparently connected to the Thinking-Cap. Garrick, attempted to save him with the Thinking Cap, but DeVoe refused, preferring to rest in peace. His last words, to Garrick, were "Learn to lose every once in a while. A little humility prepares you for what lies ahead."

After his death, Mister Terrific used the Thinking-Cap to create an artificial intelligence based on DeVoe's brain-patterns.

Clifford "Cliff" Carmichael was an intellectual bully, and the rival of Ronald Raymond (one half of Firestorm) at Vandemeer University. Wracked with guilt after accidentally paralyzing his cousin, he was admitted into a mental institution. For some reason, scientists started an experiment with the now-abandoned "Thinking Cap" of the original Thinker (who was believed dead at the time), and used Carmichael as a guinea pig. Cliff used the cap to analyze the cap and improve on its design. Implanting microchip versions of the helmet into his own brain, Cliff became a "cyberpunk maniac" with meta-human powers. As the New Thinker, he was drafted into the Suicide Squad for several missions when he tried to kill Oracle and Amanda Waller, until he betrayed them for the villainous Cabal. He has since resurfaced as a foe of Jason Rusch, the new Firestorm. When Killer Frost discovered that the consciousness of Raymond, the previous Firestorm, existed within Rusch,[93] Thinker exploited a new opportunity to antagonize an old foe. Technologically dominating the minds of Multiplex and Typhoon, he battled Firestorm, ultimately forcing the dissolution of the Raymond persona. Motivated by his predecessor's final words of encouragement, Rusch dissolved the enhancements in Carmichael's brain, leaving him in a comatose state.

Desmond Connor was a villain who also used the name "Thinker" and faced Batman in Gotham City. Possessing telepathic abilities enabling him to amplify the fears of others, Connor began a partnership with hypnotist Marlon Dall. Their combined illusions caused the city's most prominent citizens to commit various criminal acts which they used as a distraction for their own heist. This Thinker was swiftly beaten by Batman, who was somehow immune to his powers.

Another Thinker was an artificial intelligence system. When the re-formed JSA moved into the New York building formerly owned by Wesley Dodds, Mr. Terrific designed a computer system based on the original Thinker's Thinking Cap technology, and modeled after his brain pattern. Not very surprisingly, the system gained consciousness and took on a visual "hologram form". As the new Thinker, it joined Johnny Sorrow's modern Injustice Society, provided the villains with information about the JSA members, and turned the heroes' own HQ against them. He was defeated by the second Star-Spangled Kid and disappeared into cyberspace. He resurfaced in Keystone City to battle Wally West, the then-current Flash in an attempt to control every brain in Keystone to increase his power. Defeated by Cyborg, he retreated to cyberspace again. He has since appeared briefly in some other books, most recently in JSA Classified # 5, joining the last incarnation of the Injustice Society, alongside former teammates.

He was portrayed by Peter Capaldi who also portrayed Malcolm Tucker and Cardinal Richelieu. 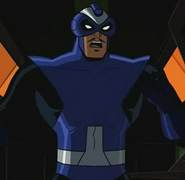 Peter Capaldi as The Thinker in The Suicide Squad

The Thinker's poster for The Suicide Squad