Destroy the world and remake it into a paradise.

Assimilate everyone into the Paradise Guardia.

Cult
Thinknet is a doomsday cult founded by S that serves as the main antagonistic faction of Kamen Rider Zero-One: REALxTIME.

They seek to bring about the end of the world by using nanomachines to assimilate everyone into a virtual paradise of their own making, seeing themselves as the "chosen ones" of S who will accompany him into the virtual paradise known as the "Paradise Guardia". Through connecting to the Thinknet website using customized ZAIASpecs, the members of Thinknet are able to project digital avatars in the real world using nanomachines. They are also all equipped with an Abaddonriser and Crowding Hopper Progrise Key to enable them to transform into Kamen Rider Abaddon.

Thinknet was founded by S at some point following the Daybreak Town Incident. Preaching of the end of the world and declaring that he would remake it as a new perfect one using nanomachines, S attracted millions of people from across the world to Thinknet's cause, with the total membership of Thinknet eventually numbering over 100 million. With the ZAIASpec schematics linked to them by Makio Nodachi of ZAIA Enterprise, Thinknet was able to produce modified ZAIASpecs that enabled their users to log onto their website and project virtual avatars in the real world using nanomachines.

On the day Thinknet scheduled to put their plans in motion, from within a massive arena, S set the clock on a modified Thousand Jacker to count down from one hour to the destruction of the old world. At the same time, the Abaddons of Thinknet launched attacks all over the world, spraying people with nanomachines in order to assimilate them into their virtual reality. They were met by A.I.M.S. and the other Kamen Riders, but the Riders were able to do little against Thinknet's sheer numbers and nanotechnology. Aruto Hiden also made his own attempt to confront S, but was defeated.

As the countdown reached midway, S inserted the HellRise Key into the Thousand Jacker to begin the next stage of his endgame. S was then confronted inside the arena by Aruto again, who became Zero-One Metalcluster Hopper to fight him once. During their clash, S used the ThousanJacker to create a massive explosion that decimated the arena, leaving an injured Aruto behind but with S having mysteriously disappeared.

It was not long before S's followers realized S's talk of ushering in paradise was a lie and that he did not intend for them to accompany him. As Lugo and Buga held off the A.I.M.S. and MetsubouJinrai.NET Riders, Bell led the remaining Thinknet forces to S's hideout in an abandoned church. After Aruto defeated S, Bell appeared to attack S and revealed he knew of S's true goal to simply create a world for his wife, stopping him before he could shut down the countdown. Bell then stole S's Eden Driver and used it to become Kamen Rider Lucifer to fulfill S's original plan of destroying the world and ushering in a new paradise to replace it. At the same time, Lugo, Buga and Moore led the rest of the remaining Thinknet followers in holding off the heroic Kamen Riders, while Is as Kamen Rider Zero-Two battled Lucifer's accompanying forces. The high-ranking Abaddons were defeated by the combined attacks of the A.I.M.S. and MetsubouJinrai.NET Riders, while Lucifer was defeated by a combined attack from Zero-One and Zero-Two just before the countdown reached 0, foiling Thinknet's plans to bring about doomsday.

After Thinknet's servers were destroyed, the inner circle of Thinknet, along with their collaborators, were all arrested. 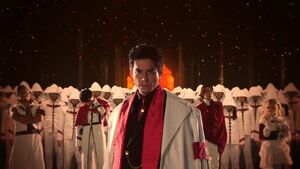