Slave to the Untouched Inquisitor

Killing intruders of the Dome of the Forgotten.

Protect the Lady of Light from the Untouched Inquisitor (failed).

Kill the Saltborn under the Inquisitor's orders.

The Third Lamb, formerly known as Kinoa, is a minor antagonist and boss in Salt and Sanctuary.

Kinoa was once the beloved hippogriff of Laineia, the mistress of the Dome of Light. She was once a loyal beast who took pride in protecting the pilgrims of the Dome from raiders and bandits. But that all changed when the Untouched Inquisitor invaded. Despite her best efforts, Kinoa was overwhelmed by the Inquisitor's Hornet Steels, losing the pilgrims and Laineia as the first and second "Lambs" of the Inquisitor's expedition to remove everything he condemned sinful. Without the people that she grew to love, Kinoa lost the will to fight back and was condemned by the Inquisitor to become the Third Lamb. Unlike the first two, the Inquisitor saw potential in Kinoa and conducted torturous experiments on her that made her under his control. Now a bound and broken thrall of once her former glory, the Third Lamb serves as a sentry for the Inquisitor in his Dome of the Forgotten.

The player discovers the Third Lamb not long after defeating the Inquisitor, guarding the hallway that leads to the Luna Sage. With no other alternative passageways, the player is forced to put the hippogriff out of her misery. She is strongly resilient to strike and poison weapons but weak to fire and arcane weapons. She attacks by striking the player with her large feet, following it up with a bite or striking with her tail that inflicts poison. She can also unleash a barrage of electric energy from her mouth which can be avoided by quickly dashing past her. As she loses health, she becomes quicker and acts more aggressively, following her attacks with quick combos. Once all of her health is depleted, the hippogriff is slain and drops her beak. 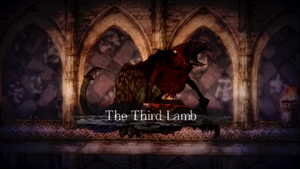 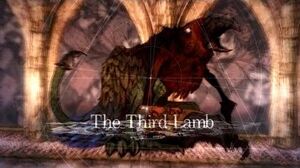 Retrieved from "https://villains.fandom.com/wiki/Third_Lamb?oldid=3831974"
Community content is available under CC-BY-SA unless otherwise noted.