Track down and eliminate all threats to the Roman Orthodox Church.

Exterminate all heretics and traitors to the Roman Orthodox Church.
Eliminate all rogue magicians.

The Thirteen Knights of the Roman Catholic Church (in Japanese: ローマ正教十三騎士団 Rōma Seikyō Jūsan Kishidan, lit. Roman Orthodox Thirteen Knights Group) is a group of warriors who are one-shot antagonists of the A Certain Magical Index series. It is an organization comprised of thirteen holy knights of the Roman Orthodox Church who work on behalf of the church to exterminate all threats that are posed to the church such as heretics, traitors, and rogue magicians.

The Thirteen Knights make their debut in the Deep Blood Arc where they have been sent by the Roman Orthodox Church to hunt down and eliminate Aureolus Izzard, an alchemist and the former Cancellarius (secret secretary) of the church, for his defection from the Roman Church and his alignment with the opposing English Puritan Church. The knights are deployed to Misawa Cram High School where he is currently hiding out at. They are allowed into Academy City by Aleister Crowley and kae it to the school. However, their arrival is left unreported to Stiyl Magnus and he and Touma discover the corpse of the Knight Parisfal.

The initial strike did not end well as one of the members was killed and many others went missing. the next night, the remaining seven knights all gather outside the main building and activate the Georgian Chant. The Vatican activates the chant and the remaining knights all aim it at the school where Aurelous is at and launch it while Touma and Stiyl watch. However, Aureolus uses his Ars Magna to deflect the chant and ends up destroying both the attack and presumably the remaining knights. Afterwards, Izzard is defeated and the knights are left dissolved with the Roman Church reporting on it and weakening their power.

According to Stiyl, the knights were originally based off of the Knights of England and act as the Roman Church counterpart to them. Though, they are second-rate by comparison to the English Knights. Despite this, however, the knights are still strong and capable warriors. 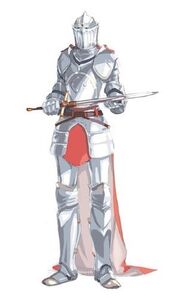