< Thomas
View source
watch 01:36
We're Getting Mutants in the MCU - The Loop
Do you like this video?
Play Sound

Claim the Park for Russia.

Destroy the White House (both formerly).

Thomas, also known by his real name of Nikolai, is a major character in the Cartoon Network series Regular Show. He debuted in the special "Exit 9B" and originally served as a hero, but in the half-hour special "The Real Thomas", his true motives are revealed as the secondary antagonist of the special. He also serves as an overarching antagonist of various episodes due to his status as a spy being unknown until he got exposed. He turned more to an anti-hero eventually.

He was voiced by Roger Craig Smith.

According to the episode "The Real Thomas", Thomas was actually a Russian spy and his mom was actually a robot with Italian accent programmed by M.O.M.M., the organization he works with. He posed as an intern named Thomas and gained the Park Workers's trust and friendship, and stopped any FBI Agents who figured out his secret. It turns out he deceived his friends and working with another Russian spy named Natalia planned to remodel the park into a Russia-looking park and destroy the United Nations/Washington DC.

Nikolai was going to shoot the missile, but later had a change in heart after seeing the friendship he had with the park workers and disables the missile. He then leaves on the run from U.S. and Russia and bids his friends goodbye and runs away from the park to go into hiding.

Finally, after being able to hide his identity from both countries, Thomas did return to the park for a visit, such as attending Muscle Man's wedding, disguising as an elderly man.

Thomas also appeared in "Guys Night 2", where Mordecai, Rigby, Pops, Muscle Man, and Hi Five Ghost gave him a guys night before he was to head over to the dam and go into hiding for good.

In his last appearance Thomas is sitting on the top of a Russia submarine while watching the park blasting into space. It can be assumed that he now works as a navy official. As seen where he raises his drink and bids his friends to space, Thomas likely became aware of an outcome danger that lies ahead to his friends, involving Pops' origin and his relationship with his brother, Anti-Pops.

It's unknown what happened to Thomas during the end of the series. However, one could assume that if he did get a spot in the Navy, he continued to atone for his crimes. 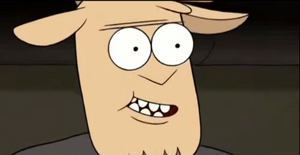