Leader of the Irish Mob

Get revenge on the Marcano crime family.

Thomas Burke is one of three tritagonists (alongside Vito Scaletta and Cassandra) in the 2016 video game Mafia III.

He is the leader of the Irish Mob in Pointe Verdun, who decides to get revenge on the Marcano crime family for the death of his son Danny. Deciding to work as an underboss for Lincoln Clay, Burke remains a reckless individual who wants to see the Marcanos burn for what they did.

He was voiced by Barry O'Rourke.

Thomas Burke was born in 1914 to Patrick Burke and an unnamed mother, and he and his family later emigrated to the United States during his childhood. The Burke family allegedly emigrated because of his father's involvement in the Irish Civil War that occurred in the 1920s, a war started over the Anglo-Irish treaty. His father would die from a heart attack, leading Thomas to start running booze and bootlegging to make money for his family. During his time in Louisiana, Burke married a woman named Sarah, who gave birth to his son and daughter, Danny and Nicki Burke. As his bootlegging operation grew, he would come across Sal Marcano, the boss of the Marcano crime family, who decided to make Burke an associate.

Burke was given the position to run his business in Pointe Verdun, while he also worked at the Burke's Iron & Metal, a scrap and salvage yard that was the base of his operations. Thomas would develop an addiction to alcohol due to the stress of his work, and would develop terminal liver cancer around the 1960s. His wife later passed away in 1958 from unknown causes, and would be buried at the Burke family tomb at the Saint Agnes Catholic Church. Despite loving his children, he would be at odds with Nicki due to her sexuality, and she would only be defended by Danny. Once his children reached their twenties, Thomas would make Nicki his second-in-command and Danny a lieutenant of the Irish mob, with the two running Thomas' moonshine business.

Though Burke was on good terms with Sal for a time, their partnership would become strain around 1966 after a falling out over lost shipment. Marcano then muscled his assets to take over Thomas' operations in Pointe Verdun, and appointed Roman "The Butcher" Barbieri to head the territory. Burke was left crippled by Barbieri since the latter enjoyed "tenderizing his meat", and Thomas was left to continue his business at his scrap yard. Despite his loss, Burke would attempt to re-earn his partnership with Sal, and continued to assist he crime family when needed.

In 1968, Burke would learn of Sal's plan to rob the Federal Reserve to obtain money plates, he decided to enlist himself as a planner and had Danny be a member of the heist. Burke did so with the intention or regaining his partnership with Marcano so he could head Pointe Verdun once again. He would create the drill that was used in the heist, and it was success as Danny and his friends, Lincoln Clay, Giorgi Marcano, and Ellis Robinson participated in it. However, Danny attend the after party with Lincoln and Ellis alongside Sammy Robinson, and he was was murdered by Giorgi on Sal's orders as Sammy's bar was burned to the ground. Thomas mourned the loss of his son, turning to more alcohol as his relationship with Nicki soured.

Angered at the loss of his son, Thomas turned against the Marcano crime family and attempted to kill Barbieri, but was beaten up and tossed into the trash. Burke later meets with Lincoln, who survived the massacre and wants to also get revenge on the Marcanos for killing the only family he had. Thomas is reluctant at first, but agrees to assist Lincoln after the latter drives recklessly around the city. After Lincoln takes control of the rackets in Pointe Verdun, Burke calls Barbieri and tells him that they will fight at his salvage yard. Burke gets his revenge on Barbieri by killing his men alongside Lincoln, and kills the Butcher before dumping his in the Mississippi River.

Thomas then becomes one of Lincoln's underbosses, and has side missions for Clay to do by stealing cars and boats for the I.R.A. If the player continues to do his side missions, Lincoln will learn that Burke is actually stealing these vehicles to do right for Nicki, as he admits that he has terminal liver cancer and only has a few months to live. Burke will assist Lincoln in destroying the Marcano crime family, and can be given territories alongside the other underbosses, Italian mafia boss Vito Scaletta and Haitian mob boss Cassandra.

If Lincoln managed to share a good amount of the territories to each underboss and decides to rule with them, Burke presumably died of cancer.

If Lincoln decides to take John Donovan's advice on killing his underbosses to take full control of the city, he will murder Burke, Scaletta and Cassandra during a sit-down. However, their deaths are avenged by Father James, who placed a bomb in Lincoln's car since he was becoming far worse than Sal.

If Burke is given all territories and Lincoln leaves the city, Thomas maintained his control and managed to remove his cancer by getting a liver transplant. During the following years, Burke flooded New Bordeaux with alcohol before selling drugs, thus making him one of the wealthiest people in the south. Due to his position, Burke would come into conflict with the Cuban mafia, who proceeded to kill him in 1984 during a shootout.

If Lincoln didn't share a single turf for Burke, he would eventually flip out and leave the meeting; also vowing to kill him.

After Lincoln fights his way through Burke's men, he confronts him inside his garage and fatally wounds him. While sitting down in a wrecked car, Burke tells Lincoln that he is "a hell of a shot" for getting past his men, with Lincoln telling him that their association did not have to end the way it did. Burke tells him he knows what he is, looking in the mirror to change himself, even though he will always be "the same worthless piece of shit gazin' back" at him every time. Lincoln then asks Burke what to say to Nicki, to which Burke replies with "the truth" while asking to keep an eye on Nicki and protect her, to which Lincoln promises, as Burke slowly dies from his wounds. 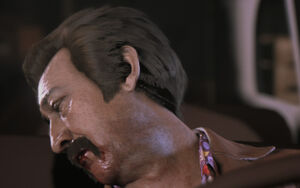 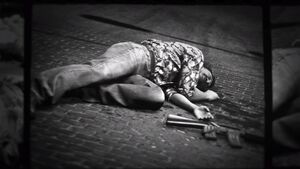