Command over the heavenly forces

Thomas J. God is the main antagonist of the "Divine Comedy" story arc in the webcomic Sandra and Woo.

Thomas J. God, the owner of a multi-billion dollar P. G. agency, is the human god overseeing the Earth. This version of the Almighty is callous in the suffering that he permits, which he cites as self-loathing. In the Divine Comedy, Thomas signs the death warrant of Sandra North, condemning her to die gruesomely, and Cloud - her boyfriend - would never be able to get over it, ultimately becoming a vicious crime lord. Appalled by this, Ganesh convinces the Devil to conspire with Larissa to save her friend in exchange for her soul. Taking the offer, the Devil appears before an unfazed Larissa. The Devil bargains with her saying that he would make her a succubus after her death, which would mean that she could have all of the sex, drugs, and dubstep that her heart desired. The Devil explains that due to the rules, he couldn't directly interact with God's subordinates, neither could he harm them. While he could try everything in his powers to prevent them from enacting their godly duty, Thomas could easily cut all losses and kill Sandra on the spot. This rule was apparently established by Upper Management.

On the day of Sandra's assassination, Larissa accompanies Sandra to the mall, and stocks up on weaponry. Without warning, the angels attack, leading to massive damage. Just when it seemed as though Sandra was in the clear, the angels disguise themselves as her friend, Luna, and seemingly crush her to death with the falling debris. Through an elaborate scheme (which depended on reader choice), Larissa manages to save Sandra, who only sustains a mild concussion and a few treatable bruises. Angered by the Devil's intrusion, Thomas threatens to sue the Devil by compiling an army of one million lawyers. The Devil accuses God of violating the Holy Code of Elysium in his attempt to kill Sandra, while God points out that he doesn't play by the rules either. Odin, hearing the two argue, breaks out of his imprisonment, and confronts Thomas on how he corrupted the driver's logbook, thus causing his unjust punishment. He then slices Thomas in half with his sword. Sometime after his death, an accountant named John Medley is hired as the new god of the humans, which suggests that Thomas was originally an ordinary man before ascending to godhood.

Rather than being the loving, merciful god as portrayed by many religions, Thomas leans more towards the Maltheistic interpretation of the Supreme Being. Thomas is alarmingly callous in committing acts of atrocities; he proves this when he signs Sandra's death warrant without a hint of remorse, knowing that this would greatly damage Cloud's life. What's worse is he doesn't as much as give a reason as to why he would allow a young girl to die a horrible death, thus leading to the idea that he enjoys exercising his power of them. This callousness is what urges the Devil into working with Larissa to save Sandra from her untimely death.

When he confronts the Devil on foiling his plans, he attempts to excuse the many times that he violated the rules to paint the Devil in a negative light. His egotism also caused Odin to suffer punishment when it was entirely his fault for manipulating the logbook. Rather than admit to what he had done, he pins the blame on Odin. With his utter lack of empathy for anyone around him, Thomas is arguably the most twisted villain in the webcomic. 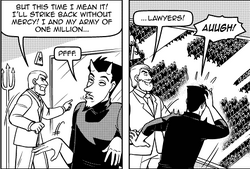 God threatening to sue the Devil with one million lawyers. 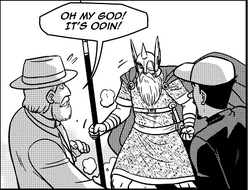 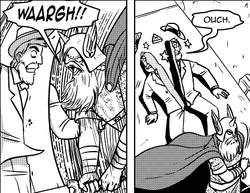 Thomas meets Thor in the middle. 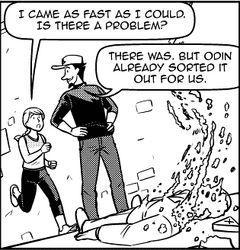 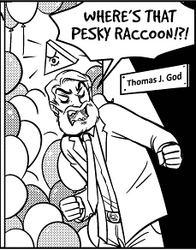 Seeoahtlahmakaskay trolling Thomas.
Add a photo to this gallery

Retrieved from "https://villains.fandom.com/wiki/Thomas_J._God?oldid=3586695"
Community content is available under CC-BY-SA unless otherwise noted.