Villains Wiki
Register
Don't have an account?
Sign In
Advertisement
in: Mature, Evil from the Past, Deities,
and 53 more
English

The God of Thunder

Member of the Aesir

Enforcer for his father Odin

Wipe out the giants of Jotunheim for his father (succeeded).

Eliminate Kratos and Atreus to avenge the deaths of his sons and brother as well as keep them from interfering with his father's goals (ongoing).

Thor is one of the main antagonists in the God of War video game series, serving as the secondary antagonist of the Norse era games. He is based on the mythological Norse figure of the same name. Like many of the Greek Mythological figures from the same franchise, he is a far more sinister and cruel figure than his classic myth counterpart.

He is largely unseen but is mentioned often throughout the 2018 God of War game before appearing very briefly in the game's true ending. He will return in the sequel as one of the main antagonists.

In the upcoming sequel, he will be voiced by Ryan Hurst, who also played Beta in The Walking Dead.

Little is known of Thor's history as yet, but he is the son of Odin and Fjörgyn, a Giant from Jötunheim. He was shown to have a violent, brutal, and destructive nature about him, one that his father Odin capitalized on when he had Dwarven brothers make for Thor a hammer named Mjolnir with which to kill all the giants.

Having grown paranoid about Ragnarök and determined to prevent it at any cost, Odin ordered Thor to use Mjolnir's power to annihilate the Giant race in the foolish belief that, without the giants, Ragnarok would not occur. Thor eagerly agreed to the task and laid waste to the Giants despite Freya's protests.

Thor "befriended" the Jotunn warrior Aurvandil, and asked him for help in a quest in Vanaheim, just to intentionally kill him.

Thor is loyal to his family such his father, Odin. He viewed Magni as his favorite son. He has good term with his brother, Baldur and trusted him despite they have differences.

When Thamur the Frost Giant Stonemason searching for his son, Hrimthur, Thor showed himself and killed Thamur by felling to his very own chisel as well took credits for the stonemason crushing and freezing the entire village famed worshiping the Vanir God, Njörd. According to Mimir, the truth is the "sweaty bawbag" just got lucky.

Thamur's son, Hrimthur, disguised himself as a mortal and offered to create Asgard's wall in exchange of an audience with Freya, Odin agreed. When Odin learned Hrimthur's identity, Thor killed the son of the Stonemason, Thamur. But unbeknownst to him, Hrimthur's plan was completed for the preparation for Ragnarök when Surtr will arrive to burn down Asgard to ashes and he put a secret weakness in the wall.

Thor killed the stone giant, Hrungnir by smashing his head with his hammer, the blow was so intense that Thor got stone parts on his skull to this day. However, Thor was drunk and got crushed by Hrungnir's corpse until little Magni and Modi entered and removed Hrungnir's body to save him. Thor gives all the credits to his favored son, Magni while Modi remained his jealousy towards his brother.

Thor killed the eight arms frost giant, Starkaðr by tearing off his arms one after another.

After Thor lost Mjolnir to the Frost Giant King, Thrym, he sneaked with Freya to Jötunheim for Freya and Thrym's wedding. When Thrym shown the hammer, Thor showed himself and took back Mjolnir to kill Thrym by smashing his skull and continue to kill the other Frost Giants until Freya casts a spell to return to Asgard and cursed Thor from ever going to Jötunheim which caused the God of Thunder hold resentment to Freya.

Later, Thor and Odin would go on other rampages, abusing their power throughout the Nine Realms and generally making the inhabitants of the different worlds miserable.

Thor fought the World Serpent in Midgard, in a battle so intense that it could be felt in all the 9 Realms, the Serpent proved to be as strong as Thor and it ended up as an stalemate, both of them hate each other, who will extend to Ragnarök, where they are destined to fight again and kill each other.

Mimir states that according to the prophecy, the Ragnarök battle between Thor and the Serpent is so intense that it will shake the Yggdrasil violently, sending the Serpent back in time, before its own birth.

Thor's recklessness had made a fool of himself and made a careless and stupid mistakes. Many characters insulted him such as Kratos called Thor a fool that not even Mjolnir in hand can break the ice to reach Thamur's magical chisel. Mimir called Thor by many insults for causing destruction such as fat dobber, sweaty bawbag, thunder lummox and biggest butchering bastard in the 9 realms. Brok called Thor as the big idiot. Atreus called Thor an idiot when getting crushed by Hrungnir's body. Most of all, he nearly lost his hammer while he is sleeping carelessly.

Thor is the husband of Sif and lover of the Jötunn Jarnsaxa and with them he sired two sons, Magni and Modi. He was known for having favored Magni and after Magni was killed by Kratos, Thor was extremely furious and possibly saddened and let out his rage by beating up his younger son for cowardly leaving his elder brother to die at the hands of the Ghost of Sparta.

In the hidden ending to God of War, after Kratos and his son Atreus return from their long journey to spread Faye's ashes from atop the highest mountain and killed Baldur and his other son. Years later, Thor is most likely furious and angered by the death of both of his sons and brother and ordered by Odin to put an end to their meddling, so he furiously arrives on their years later and unleashes his rage and wrath upon them by first causing a huge thunder storm to wake them up and then beginning to attack their house with lightning, destroying much of the roof. After they had armed themselves, Kratos demands him to reveal his identity and in response Thor lifts his cloak to reveal Mjolnir and although not seen, it is certain that Thor attacked them as Atreus himself said after waking up from the dream.

Thor will appear in the upcoming sequel as an antagonist.

Although Thor's full appearance is not fully shown, he wears a hooded black cloak and has blue eyes. He has a thick beard and red hair, which seems to be braided (as mentioned in The Lost Pages of Norse Myth: Episode 4). He is exceptionally tall and muscular, roughly equal to Kratos in terms of body stature and height. He has a blank and serious expression. According to Mimir, Thor also has several pieces of the stone giant Hrungnir stuck in his skull.

In the upcoming sequel, Thor is depicted as overweight, with a bulging belly (which Mimir correctly described Thor as the "fat dobber") and unkempt red hair. This reflects his behaviour in Norse lore as a heavy drinker. 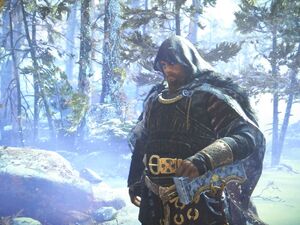 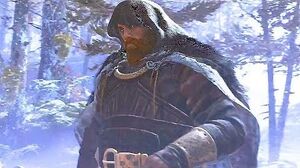