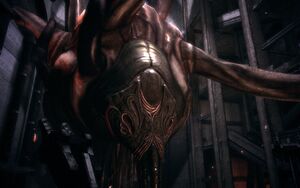 The Thorian is a boss creature from Mass Effect. It is an ancient, giant plant creature lurking beneath the planet Feros, being a sprawling mass of tentacles extending throughout the planet. It releases spores that put people who inhale them under the Thorian's control, and can produce zombie-like creatures called "Thorian creepers" to do its bidding. The Thorian is at least 5 millennia old, and hibernates for thousands of years at a time before rising again to wreak havoc, as it has when the player visits Feros. When confronting it at its core, the Thorian speaks to Commander Shepard through clones of Shiala, another character, that it creates. It is defeated by destroying all of the creature's main neural tentacles.

Retrieved from "https://villains.fandom.com/wiki/Thorian?oldid=3564264"
Community content is available under CC-BY-SA unless otherwise noted.