Those Who Slithers in the Dark

Circa Year 91 of Fódlan Calender

Nemesis
Flame Emperor (Leader of the Army of the same name; a commander ally, not an actual member of the organization)

Topple the Church of Seiros and demolish the rule of Sothis' children.

Causing the Tragedy of Duscur

Those who Slither in the Dark are the main antagonistic faction in Fire Emblem: Three Houses. They are a mysterious faction led by Thales and are at war with the Church of Seiros. It is also revealed that the mysterious Flame Emperor and their army allied with them to achieve their goals, but said goals are seemingly at odds with Thales' own.

They were responsible for the Tragedy of Duscur and the following mayhem that stirred the whole game' plot.

Those who Slither in the Dark are descendants of a long lost civilization known as Agartha. Thousands of years ago, the people of Agartha once coexisted with the Nabateans, the children of the Goddess Sothis, but eventually, they turned their back on their Goddess and dedicated themselves to the advancement of technology for their prosperity. In time, the Argarthans became greedy, arrogant, and imperialistic, eventually challenging Sothis herself for dominance.

To punish the Argarthans' hubris and arrogance, the Goddess' daughter, Seiros, fought a war with the Agarthans and destroyed their nation and eliminated the majority of their race. However, Fódlan was so devastated by the conflict that Sothis was forced to expend most of her energy to recover it, causing her to fall into a long slumber in her Holy Tomb at Zanado.

However, this didn't mark the end between the Argathans and the Nabateans. The surviving Agarthans retreated underground to what would be their base, Shambala, and their descendants became Those Who Slither in the Dark, who would devote centuries to plotting their revenge.

Those Who Slither in the Dark's first attempt at revenge occurred sometime after the Goddess had entered a long slumber due to the exhaustion of using her power to heal the war-torn Fódlan. While the Goddess slept at Zanado, guarded by her children, Fódlan was invaded by a foreign army. A bandit named Nemesis  sought to liberate his people from the invaders, and was persuaded by agents of Those Who Slither in the Dark that he could attain the strength to do so by taking it from the Goddess.

Nemesis and his allies, the Ten Elites, killed the Goddess and most of her children, and Those Who Slither in the Dark fashioned weapons from their corpses and the Crests from their blood. Nemesis banished the invaders and was crowned the King of Liberation, but he became corrupt, and the atrocities that he and his allies had committed to gain their victory would come back to haunt them. Seiros,  one of the few survivors of the massacre at Zanado, lured one of Nemesis' allies, Wilhelm Paul Hresvelg, to her side and used her blood to imbue him with the Crest of Seiros.

Wilhelm founded the Adrestian Empire and, together with Seiros and the Four Saints, warred against Nemesis and the Ten Elites, eventually overthrowing them and conquering Fódlan. As Seiros used the Church of Seiros to revise history for her benefit and secretly prevented the people of Fódlan from ever again developing advanced technology or threatening her, Those Who Slither in the Dark turned to other plans. Over the following centuries, they conducted extensive experiments on the Crests and created the Crest Stones. They also manipulated Fódlan's leaders from the shadows, promising power to them and using them to subtly undermine the Church as well as sow chaos.

Over a thousand years after the defeat of Nemesis, the final stage of their revenge against the surface neared its fruition. They gained lofty connections among the nobles of the Adrestian Empire at a time when a rift had formed in its relations with the Church, and after the Insurrection of the Seven in Imperial Year 1171, they experimented on the children of Emperor Ionius IX to create an ideal ruler whom they could control. These experiments were previously conducted on children from House Ordelia, but with less success, as the only survivor of the experiment had their lifespan dramatically shortened.

Meanwhile, Fódlan was beset by tragedies and uprisings, weakening the Church, the Holy Kingdom of Faerghus, and the Leicester Alliance. Finally, a librarian of Garreg Mach Monastery, Tomas, was assassinated during his retirement and is taken as a disguise for Solon . Under the name of Tomas, he returns to Garreg Mach and resumes his role as the librarian to infiltrate the Church of Seiros.

Those Who Slither in the Dark make their first move against the Church of Seiros by implanting a a dark mage during the Goddess's Rite of Rebirth in Imperal Year 1180. They make themselves an ally with the Western Church and the Death Knight and attempt to steal the remains of Seiros. Though they were able to open the seal put upon the coffin, they instead find the Sword of the Creator and shortly afterwards are slain by newly appointed professor Byleth. A couple of days later, the mysterious Flame Emperor reports to an unidentified lord that not only were the bones missing and the Sword of the Creator was instead found, but Byleth was able to awaken the sword's power despite its missing Crest Stone. The Flame Emperor suggests that they let the professor keep the sword as they do not have enough information to act. The lord is then given use of the Death Knight once more and the Flame Emperor leaves.

While Byleth and their students deal with some bandits, the Death Knight is told to kidnap Flayn, sister of the second-in-command of the church Seteth, and harvest her blood for upcoming experiments. However, when Byleth returns from the Kingdom, they are immediately given their mission of the month to find Flayn, and discover that the Death Knight is keeping her in the catacombs of Garreg Mach Monastrey and engage in combat. After the battle against the Flame Emperor Army, the Flame Emperor themselves meet with the professor for the first time, warning them of what will come and leaves. Byleth and their students then save Flayn, and another student called Monica, who went missing the prior year before she could graduate.

A couple of months later, the same time the librarian Tomas went missing, Those Who Slither in the Dark begin conducting experiments upon the people of Remire Village, causing them to go berserk and slaughter each other. Byleth's mission for the month is to investigate the village, during which they learn that Tomas is actually Solon and a member of Those Who Slither in the Dark.

In the Black Eagles route, though Edelgard joins forces with them, she makes it clear that she has every intention of defeating them if they continue to be a threat. After Edelgard captures Arianrhod, killing Those Who Slither in the Dark's agent, Cornelia, in the process, Thales threatens Edelgard by destroying Arianrhod with "javelins of light." After reuniting Fódlan under the rule of the Adrestian Empire, Edelgard uses her newfound powers to engage in an unseen and silent war against those who slither in the dark, eventually emerging victorious and wiping them out completely, ensuring peace for Fódlan.

In the Blue Lions route, though Dimitri suspects a conspiracy was behind the massacre at Duscur, he never learns their role in it. Edelgard allies with Those Who Slither in the Dark to bolster her forces as the Holy Kingdom of Faerghus advances on the Adrestian capital of Enbarr. However, Thales is killed in his guise as Lord Arundel when the Kingdom liberates Derdriu, leaving Those Who Slither in the Dark leaderless. Myson takes command of their remaining forces in the empire to continue supporting Edelgard until either her or his own death, leading the rest to return to the dark.

During the war phase in the Golden Deer route, dark bishops from Those Who Slither in the Dark first appear during the battle of Gronder Field, among the ranks of the Imperial army. Lysithea notices the presence of these mysterious masked mages clad in black, and the evening after the battle, she approaches Byleth and Claude to inform them of her and her family's history with the Empire and these mages and of the blood rituals they performed on her and her deceased relatives, warning the two to be cautious of these factions' alliance and their dreadful knowledge and power as Leicester Alliance forces prepare to advance deep into Imperial territory.

After Alliance and Almyran forces capture Fort Merceus, Those Who Slither in the Dark fire javelins of light at the fortress in an attempt to destroy the victorious Alliance army, but due to the whims of the Death Knight, Alliance forces escape unscathed. Their usage of these weapons allows Hubert to pinpoint the location of Shambhala, and he divulges this information to Byleth and Claude in a posthumous letter after his and Edelgard's deaths. Alliance forces then prepare to storm Shambhala, which is revealed to be  located in the vicinity of Ordelia and Goneril territories. There, the forces of the Church confront and defeat Thales, who then attempts to kill everyone with him by activating powerful Agarthan weapons to destroy Shambhala. Rhea destroys many of the weapons and is wounded in the process, but survives.

After Thales' death and the destruction of Shambhala, Those Who Slither in the Dark succeed in their grand plan and revive the Fell King Nemesis and his army in order to destroy the Church of Seiros and all of the people of Fódlan. The undead army, combined with some of the remaining Agarthans under Odesse's command, march to Garreg Mach Monastery, leaving a trail of devastation in its wake, but Claude and Byleth manage to defeat Nemesis before he can begin his reign of terror. Members of their group still remain, scattered across the continent.

In the Church of Seiros route, after Edelgard and the Adrestian Empire are defeated, Rhea and Byleth receive a posthumous message from Hubert, who explains the need to destroy Those Who Slither in the Dark and provides a map to their underground stronghold, Shambhala. There, the forces of the Church confront and defeat Thales, who then attempts to kill everyone with him by activating powerful Agarthan weapons to destroy Shambhala. Rhea destroys many of the weapons and is wounded in the process, but survives.

The Flame Emperor Army is a military faction led by the mysterious Flame Emperor and are in a reluctant alliance with Those Who Slither in the Dark. However, it is revealed that the Flame Emperor was Edelgard, who was planning to turn against Those Who Slither in the Dark all along. The army was mostly destroyed during the battle in Garreg Mach Monastery. Five years later, all of its remnants, including the Death Knight, serve the Adrestian Empire afterwards and fight for Emperor Edelgard against the Church of Seiros, the Holy Kingdom of Faerghus, and the anti-imperial houses in the Leicester Alliance. 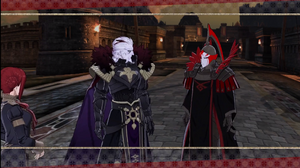 Retrieved from "https://villains.fandom.com/wiki/Those_Who_Slither_in_the_Dark?oldid=3929122"
Community content is available under CC-BY-SA unless otherwise noted.