Thoth Amon was a dark wizard and a recurring villain in Robert E. Howard's Conan series. He has appeared in many adaptations of the barbarian's tales. Thoth-amon was a wizard from the lands of Stygia who held the moniker "Thoth-amon of the Ring".

He is best known for crossing paths with [1] twice, first in the story "The God in the Bowl", and again in the tale "The Phoenix on the Sword'"" (the very first Conan story written). Although he and Conan never meet face-to-face in any of Howard's original stories, indeed Conan himself only found himself involved in Thoth-Amon's schemes by random chance, later writers would later depict him as the Cimmerian's arch-nemesis.

L. Sprague de Camp and Lin Carter, in their pastiche stories, made Thoth-amon the most prominent adversary of Conan. In the Marvel Comics series, Thoth-Amon was also Conan's life-long opponent. He had a striking appearance designed by Barry Windsor-Smith, with a ram-horn ornamental headdress. In the Dark Horse Comics series, Thoth-Amon is also an important character, but with a more traditional Stygian (Egyptian-looking) appearance.

The most powerful of all Stygian sorcerers, Thoth-Amon is a corrupt and terrifying Sorceror of the Black Ring. It is said that even the lord of Stygia fears to cross him. Although Thoth-Amon claims to worship Set , the vile serpent god, in fact he has no interest in anything except his own power.

Thoth-Amon is a cruel, capricious man who will stop at nothing to gain sorcerous power. He first encountered Conan during "The Devil Within", where Conan was protecting Kalanthes, priest of Ibis. The priest was Thoth-Amon's mortal enemy, but with Conan's help, Kalanthes was able to thwart Thoth-Amon's plan.

Thoth was born into destitution and poverty, and his abusive, alcoholic father forced him to beg and pickpocket for money. His only solace was his kind sister, and he promised to take her away from poverty to a life of happiness and plenty.

One day, one of Thoth's friends, a boy named Amon, managed to warn a high-ranking priest of Ibis about an attempt on his life. The priest offered Amon an opportunity to become an acolyte of Ibis, the peaceful Heron god of Stygia. However, when Amon told his friend Thoth of his fortune, Thoth crushed his head with a heavy stone. His plan was to go in Amon's place, for the priest had not seen Amon closely and might well mistake any dirty urchin for him. And so Thoth entered the service of Ibis, and acquired much knowledge and learning. However, his insatiable greed and lust for power drove him to delve into forbidden knowledge. In dark, forgotten scrolls Thoth learned of the lost kingdom of Acheron. Desiring its power for himself, he made his way to the site of Acheron. It was here that the serpent god Set tested him. Here Thoth died, or nearly died, but was revived by the Black Ring of Set. With this talisman and his newfound allegience, Thoth returned to the church of Ibis. Secretly worshipping Set, he conducted sacrifices and set horrible sorcerous traps for his fellow acolytes. He was eventually discovered by his mentor, but defeated him in sorcerous combat and framed him for the heresies and murders he himself had done.

Thoth rose quickly in the activities of the church, firstly because of his diplomatic skills, but mainly because he was assassinating his rivals. During this period, he met a quiet, studious young man named Cstephon who was in the line of royal succession. He began assassinating the man's family as well, and befriending Cstephon to earn his trust. When the young man was eventually crowned King of Stygia, Thoth was appointed to advise the young king, and renamed himself Thoth-Amon.

Having secured a powerful position of leadership in Stygia, Thoth-Amon continued to tear it apart. He embroiled the nation into pointless wars with its neighbours, and continued to assassinate the priests of Ibis. Fearful for their safety, the people had begun to join the cult of Set. It was at this time that Kalanthes, who had been an acolyte and priest with Thoth-Amon since he first joined the church, was finally able to confirm Thoth-Amon's treacherous allegiances. He and his brother priests of Ibis attempted to assassinate Thoth-Amon, but failed, and all but Kalanthes were killed. Thoth-Amon used this chance to declare the worship of Ibis to be heretical, and turned Stygia over to the worship of Set. Eventually Kalanthes was captured, and Thoth-Amon sentenced him to death by crucifixion, though he was rescued by rebels. At last, with the king's mind destroyed by sorcery and the nation given over to the worship of Set, Thoth-Amon took his chance to claim the lost power of Acheron. He thought to bind these blackest sorceries to his own will, but only succeeded in releasing the foul monsters and evil powers that had been bound into the netherworld. He battled the demonic spirits, seeking control, until Kalanthes and his rebel allies arrived to do battle with the monsters of Acheron.

Kalanthes convinced Thoth-Amon that he could never control Acheron, and so Thoth-Amon closed the portal he had opened.

Thoth-Amon has a tall, menacing stature. He often dresses in robes and wears a turban. Thoth-Amon`s skin is leathery and wrinkled, showing signs of his advanced age and the ravages of his magic. Thoth-Amon`s eyes are an inhuman green, and seem to burn from within like emeralds.

Thoth-Amon is a powerful Stygian sorcerer. He has many spells and rituals at his disposal. He commands beasts, especially snakes, and many types of insects. He has the power to corrupt and infest those who he has infected with venom; before they die, horrible monsters are spawned from their bodies. Thoth-Amon can communicate with others over long distances by possessing swarms of insects.

Thoth-Amon is a schemer, like the dark god he worships. He attacks his enemies from afar using tactics that take advantage of their weaknesses. He enjoys corrupting a person's allies to use against them.

Thoth-Amon's cunning is not limited to magic. He is a master strategist, and is capable of setting traps and schemes.

By his incredible sorcerous power and political cunning, Thoth has gained control of much of Stygia. His manipulations even include King Cstephon. Thoth-Amon is able to call upon other Stygians to help him accomplish his goals. He is even capable of summoning bizarre and terrible creatures to do his will.

Like many sorcerers, Thoth-Amon is long-lived. Though he is not immune to the effects of aging, he seems to have lived hundreds of years without dying.

The source of Thoth-Amon's power is the Black Ring of Set. Without it, he is unable to call upon his sorcerous powers, and is as vulnerable as any other man. 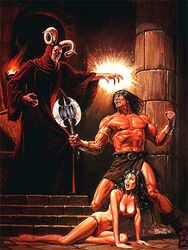 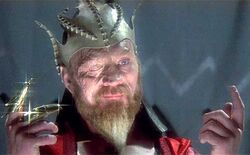 Thoth Amon in Conan The Destroyer. 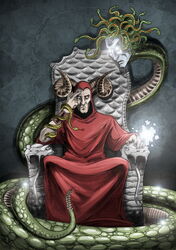 Thoth Amon with the God in the Bowl.