Thoth Khepera is an ancient Egyptian queen that was known as the Queen of Two Continents and a villainess from Batman: The Animated Series.

She has godly powers and was worshipped by her people because of it. Thoth mastered the powers of life and death and was immortal because of it. She can give people immortality however, the people who joined Thoth had their life sucked.

500 years later, Ra's Al Ghul looks for her to become immortal with out the use of the Lazarus Pit. He finally found Khepera and wants immortality. Thoth offered Ra's the secret and begins draining his life. However, she was interrupted by Talia and Batman, she dropped the guise of a young woman she had seduced others with and swore revenge. She summoned the souls of the dead around her, and grabbed Talia. Batman got her free, and let the others made a getaway. He toppled a statue over the pit, trapping Thoth Khepera underneath. 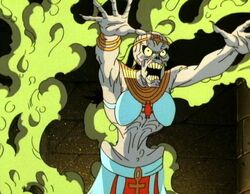 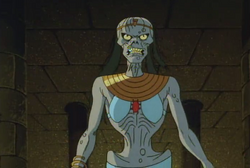 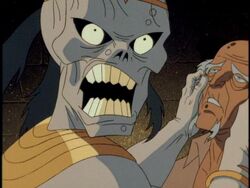 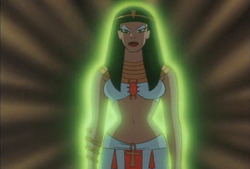