Terror, Sin, and Wickedness (the three evils it embodies)

The Three Faces of Evil (Terror, Sin and Wickedness) are an ancient and powerful demonic force within the DC multiverse, associated most with the mystical superhero known as Shazam, as well as those who share his powers and/or motives.

The Three Faces of Evil was a gigantic, hideous and unfathomably strong demon-dragon that embodied Terror, Sin and Wickedness - the monster sought to bring ruin and despair to the world and proved to be the strongest opponent Shazam ever had to face, ultimately the hellish abomination would be overpowered and imprisoned within the Rock of Eternity, the only place strong enough to keep the monster imprisoned - though for how long remains a troubling mystery.

The Three Faces of Evil is a near-omnipotent creature of pure malice, a living embodiment of terror, sin and wickedness - as such their is almost no feat the monster could not theoretically achieve, as long as it was of malicious intent : as a creature of pure evil it is largely invulnerable to harm but can be harmed by great magic, such as that found in the Rock of Eternity.

The Three Faces of Evil is a monstrous three-headed dragon of demonic appearance and monstrous design, with a writhing body made out of many tentacles similar to those of an octopus, its coloration varies from red to purple and its already frightening appearance is made all the worse by its immense size, being a dragon (as well as an embodiment of all evil).

The Three Faces of Evil is a demonic entity and an embodiment of evil, thus its personality is that of malice and unreasoning desire to inflict ruin and misery upon others, for no real reason other than it can.

This makes it an enemy that can not be bribed, intimidated nor reasoned with - a true creature of malevolence that must be defeated and imprisoned, otherwise it would continue to manipulate and ruin all of creation, most likely until it was completely destroyed. 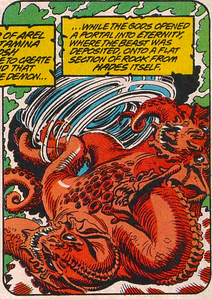 Retrieved from "https://villains.fandom.com/wiki/Three_Faces_of_Evil?oldid=3892392"
Community content is available under CC-BY-SA unless otherwise noted.