Destroy the state of Qin and its armies (failed).

The Three Great Heavens, also known as the Three Greats, are a major antagonistic organization in the popular historical seinen anime and manga series, Kingdom. They are three of the most powerful Great Generals within the State of Zhao as each member possesses martial prowess, tactical abilities, and strategical manipulation that others would call God-like and legendary as they wage and conduct warfare on a grand scale while using every aspect of their individual armies' specialties and skill sets, inspire soldiers with just their presence alone or with a simple speech, and led from the frontlines while destroying every opponent and enemy soldier that appear before them with unbridle and "monstrous" strength.

These three were frequent opponents and rivels to the Six Great Generals of Qin and Wei Fire Dragons as many considered them all to be “symbols” of their own kingdom's militaries prestige with their very presence turning any battlefield into an all-out war.

Soldiers of the 1st Gen 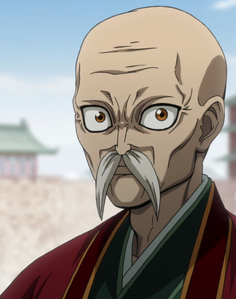 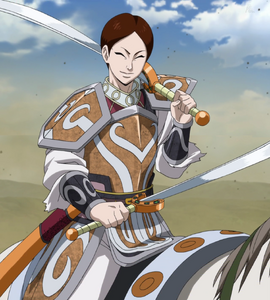 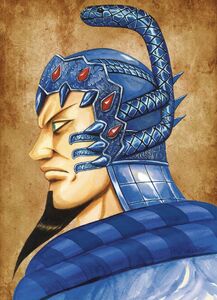 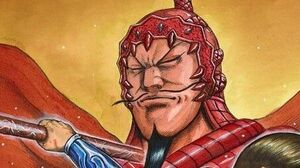 In the central plains of China, the previous generation of the Three Great Heavens were a part of a gathering of great military figures that were famous across the Warring States which consisted of the Six Great General, the Wei Fire Dragons, Gaku Ki the God of Military, and Kou En the Tiger of Chu and Conqueror of the East.

While the Great Heavens were like forces of nature on the battlefield, they suffered from bed relations with their kings and government. It notably being a major problem for Ren Pa and his successor Ri Boku.

30 years ago, during the Battle of Chouhei the previous Zhao king grew increasingly frustrated at the two-year long war campaign with the armies of Qin and decided to replace Ren Pa as the supreme commander with a hot bloodied idiot general who was instantly killed by the Monstrous Bird of Qin, Ou Ki. This horrible defeat led to the Qin winning the two-year-long stalemate and the remaining Zhao forces to capitulate. With over 400,000 captured soldiers, the Qin commander-in-chief, Haku Ki came to a decision on how to deal with these prisoners.

Citing a lack of food to spare and the danger of rebellion as his reasons, the Great General ordered the prisoners to be put death by burying them alive. This act strengthen the dreaded reputation of the Six Great Generals while it caused a massive amount hatred for the Qin to spread amongst the state of Zhao.

As rivals, the Three Great Heavens had numerous conflicts with the Fire Dragons. A notable one being fought between Gai Mou, the Raging Bull and Ren Pa during which the Zhao Great General dismissed the Bull and refused to fight him personally as he saw the man as nothing more but a dreamless brute that was content with only fighting.

Hou Ken, as a Bushin, sensed the young man's martial talent and immediately sought his death as way to prove to the heavens that he was worthy of his title. While he initially saw him as a weakling, Hou Ken's opinion changed after the young 100-Man commander managed to cut and wound him. This encounter was further deepened as they became archenemies after he killed Duke Hyou, a Great General that Shin saw as a father figure/mentor and their second duel with each other during the climax of the Battle of Sai in which the young 1000-Man commander wounded the Bushin not just once but twice after deflecting the Great General's strike in a contest of strength.

Seeing him as nothing more but a child after meeting him during Qin/Zhao alliance banquet, Ri Boku respects Shin for his accomplishments from the Battle of Bayou as he remembered the reports of a young 100-Man commander killing Fuu Ki of Intellect from the Hou Ken Army and Gi Ka, Zhao's member of the Ten Bows. However, Ri Boku showed his arrogance towards Shin as he condescends and teased him on how unfortune it was that Shin could not kill or harm him. But to the shock of everyone who was present, Shin boldly stated -

Impressed with the way that Shin riposted him, Ri Boku took a liking to him and promised to remember his words and face. However, this encounter led the leader of the Greats to greatly underestimate Shin when it came to his abilities.