Guide the Ruined King to the Waters of Life (succeeded).

Kill any sentient being he finds and imprison their soul (ongoing).

Thresh, also known as The Chain Warden, is a villainous playable character in the multiplayer online battle arena game League of Legends, who serves as the main antagonist of the None Escape cinematic and Senna: Shadow's Embrace, and one of the two secondary antagonists (alongside Gangplank) of The Ruined King. He is the archenemy of Lucian and Senna.

Formerly a warden from an already forgotten order, Thresh is a nightmarish creature that delights in the pain and suffering of sentient beings, dead or undead. His sadistic tendencies has gained repulsion even from other beings like him, and is arguably one of the most evil characters of the entire lore.

The 110th champion added to the game, Thresh was released on January 23, 2013, and is one of the most popular characters to play in the support role.

He was voiced by Mark Oliver, who also voiced Lord Garmadon in LEGO Ninjago: Masters of Spinjitzu, Miles Dredd in Max Steel, Rau Le Creuset in Mobile Suit Gundam SEED, and Mechanikat in Krypto the Superdog, among others).

Before his transformation into the relentless Chain Warden, Thresh was nothing more than a simple warden and caretaker of several magical artifacts, scripts and secrets of a forgotten order in an hidden archipelago known as the Blessed Isles. He gained this position thanks to his long years of service to the order, but he always felt that this was an excuse to seclude him from his brethren, who tried to avoid him at all costs, as his propensity to cruelty was well known among the order.

Such a rejection left the warden to resent his kind, giving rise to bitter feelings of hatred and jealousy. Thresh would turn into a grey, secluded man who was very hard to speak to, and would rarely (if ever) leave his position of patrolling the lonely halls of the order's vault, with only his resentful thoughts as his company.

The Blessed Isles was a powerful realm whose society was based on the use of arcane power. To protect themselves from outsiders who would wrongfully use their magic, the islands were protected within a dome of magic manifested as a shroud of White Mist that keep foreigners away. This barrier would be pierced for the first and last time by the Iron Order, at the orders of a mad but desperate king, who sought to use the Waters of Life at the capital of Helia to revive his lost wife. However, the Iron Order's commander, Hecarim, was there for more egregious reasons. He told his knights to murder the guardians of the Blessed Isles and loot its vaults, unleashing the chaos in the once peaceful isles.

Alone yet unafraid, Thresh watched the chaos in delight, reveling in the destruction and bloodshed. Finally, his moment of recognition would come. He knew that the invaders had come for the Waters of Life, and willingly offered his services to lead the King to the fabled place. With Thresh as his guide, the King had no difficulty finding what he was looking for. But when the he submerged his dead Queen in the sacred Waters, he was repulsed as her rotting, decayed corpse twisted to life in an unholy manner. She spoke to the King in agony, begging him for death the sweet release of death once more, and heeding her plea, the King conjured a spell to bind them together in death for all eternity. But the ancient powers and artifacts of the Blessed Isles empowered the spell beyond its intended strength, and its power multiplied a thousand-fold.

The resulting Ruination destroyed every building across Helia, leaving the fragments suspended in the air. The White Mist who shrouded the entire Isles turned black and sinister, gobbling up the entire archipelago, transforming and enslaving the Isle's residents, the Iron Order, and Thresh himself as monstrous specters of undead.

The Black Mist warped Thresh into an unholy being with unspeakable powers, but instead of being destroyed like his fellow kin, the warden rejoiced in the delightful agony with which his home had been inflicted. Thresh had been reborn into a monstrosity that, instead of transforming into a shattered form of his past self, became stronger with every soul he snatched into his sadistic hands. And for centuries, Thresh would relish the torment of their souls as they screamed from their prisons within his lantern.

Of all of his victims, Thresh most enjoyed tormenting Lucian and Senna, two married Sentinels of Light whom would become his arch-nemeses. When they first fought Thresh, he proved to be too powerful for them. Senna tried to get Lucian to retreat and regroup, but her husband refused to turn back. Taking the opportunity, Thresh threw his hook at Lucian when Senna took the blow for him, killing her and absorbing her soul into his lantern.

For years, Lucian regularly visited the Shadow Isles to defeat Thresh, but was always defeated every time, yet refused to give up on freeing Senna from her suffering and letting her soul move on. One fateful day, Lucian faced Thresh one more time, but was wrapped by his neck as Thresh showed him Senna's soul. Lucian loaded his gun and destroyed Thresh's lantern, freeing all of the souls trapped within. Senna, however, reemerged due to having the soul of the lost queen protecting her and granting her the ability to control the Black Mist and save the trapped souls within. Thresh reclaimed his lantern, letting Lucian and Senna have their victory as his plans have already begun.

Thresh awakened Viego, the Ruined King, from his slumber, promising that he would be able to continue his goals once more. With Viego unleashed on Runeterra, he attacked all of the regions with his newfound power, granted by the aid of a yordle follower. Enjoying the destruction of all of Runeterra, Thresh also absorbed this power, shaping his twisted form to be more akin to his human self.

In game, Thresh takes the role of a catcher-type character, mainly using his large scythe and lantern to attack. Thresh's passive, Damnation, allows him to collect souls from dead enemies to buff his ability power and bonus armor. Thresh can also throw his scythe forward to trap enemies in its chains (Thresh can then drag the enemy to him, being able to launch forward when the ability reactivates as Deathly Leap) with Death Sentence, shield allies with his lantern with Dark Passage, give himself bonus magic damage and swing his weapon around him with Flay, and surround himself with walls that damage and slow any enemy champion who touches them with The Box.

Explicitly sadistic, Thresh loves to inflict both physical and psychological pain to any being who is smart enough to understand and feel it. He considers himself an expert at snapping innocent minds, and is not happy enough to do this to the living, but likes to take the pain further by torturing them even in the afterlife, by imprisoning their souls in his trusty Soul Lantern, where they would suffer an eternity of torture that they can't escape. He enjoys tormenting his nemesis Lucian most of all, as he regularly taunted him with his imprisonment of Senna's soul until he was able to free her, but Thresh lets them enjoy their victory so he could toy with them in the future.

Thresh is an egomaniac who considers himself as a god, and so can use his powers against others simply because he can. This ego is driven high enough to not even consider other Shadow Isles' beings as equals, and that he is the only one at the apex of the Ruination. Sarcastic and cruel, Thresh doesn't always need to torture someone to delight in their pain, but likes to mock and take fun on those who already have lost everything, in an attempt to use his words to destroy their spirit with no need to use his chains.

Thresh's destructive personality has gained himself many powerful enemies and contempt from even within the Shadow Isles, like Karthus who finds his idea of torturing souls repulsive, Ledros who has been victim of his sarcastic mockery for centuries, and Yorick who believes him to be a remorseless being without any hope for reform. Whether this scorn is justified or not, Thresh is portrayed as a force of villainy that carries within chains the eternal torture that awaits those who encounter him, and he is determined to continue his path of destruction.

Thresh appeared loyal to the Ruined King, Viego, helping him with his goals and awakening him from his slumber. However, Thresh does not truly look up to Viego as it is mere pragmatism on his part, as he mainly wishes to enjoy the destruction that the Ruined King will unleash across Runeterra, not to mention that he was the one who led Viego to the Waters of Life in the first place just to spite his brethren. Further and in reality, Thresh's loyalty to Viego was nothing more than a façade. In truth, Thresh hated the Ruined King greatly, finding him to be nothing more than an obsessive narcissist, a fool he could easily manipulate for his own ends. He used Viego's crusade to bring back his wife to further his own goals, hoarding the Black Mist's power and the souls it claimed to empower himself and be free from the shackles of the Shadow Isles, allowing him to trek across Runeterra and reap as many souls as he wishes.

Thresh as he appears in Legends of Runeterra.

Thresh in "None Escape".

"Mortals come, lured by hope. And we are always waiting..." 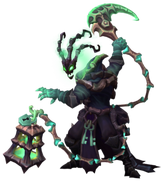