None (in the book)

Goth's brother-in-law (in the TV Series)

Find his way home and stop himself from starving.

Throbb is a male vampyrum spectrum cannibal bat and the secondary antagonist of the children's book series Silverwing.

Throbb had been captured by humans along with another cannibal bat named Goth and were both given bands. Goth hated Throbb because he had no royal blood in him and several times he attempted to kill him, but decided against it, believing Throbb could be useful in his plan to escape. Eventually, the two ripped open an air vent and escaped through it. They attacked several pigeons on their way out and ate them. This caused the owls and pigeons to think the bats the native bats were behind the attack.

When two bats, a Silverwing named Shade and a Brightwing named Marina, were attacked by an owl, Goth and Throbb killed it and told the two that they wanted to help them and wanted the two to lead them to the Silverwing colony. In reality, Goth and Throbb planned to feast on the colony when they found them, lead them to the Vampyrum Spectrum colony so they would become the Spectral bat's slaves.

After Marina became suspicious of the Spectral bats, Goth ordered Throbb to kill her. However, Throbb saw another Brightwing and assumed it was Marina, so he killed it. Shade saw him and flew away. Goth and Throbb were shot with darts by humans and the native bats escaped. Goth and Throbb escaped the humans and Throbb told Goth he failed to kill Marina and Shade knew they are cannibals, much to Goth's fury.

Goth and Throbb froze during the winter and starved. Goth wanted to eat Throbb but restrained himself. The two eventually found a group of banded bats that Shade and Marina met earlier and ate them before finally they captured Shade and Marina and Goth almost manipulated Shade to lead them to his olony. Shade pretended to accept and the Spectrals caught a bat. Shade dropped a drug into the bat and when Goth and Throbb ate the bird, they fell asleep. Shade and Marina outwitted the larger bats again.

When they woke up, Goth and Throbb chased after land Marina and caught them at a Thunderhead. Marina's band is ripped off. Goth threatens to rip Shade's wings off unless he tells them where the colony is. However, the electricity raced through Goth and Throbb's bands and they were electrocuted. Throbb was reduced to ashes and Goth was heavily injured, allowing Shade and Marina to escape and find their colony.

He appears in Firewing and tells Goth memories while in the Underworld. Although he's dead, Throbb seems to act a little tougher to Goth, possibly because of all the torture he went through in the first book.

In the TV Series

In the animated version, Throbb is notably less fit than Goth, often complaining about their predicament and groaning before flying. While Goth was given light brown fur Throbb got teal/blue, he cares for his brother-in-law and at each instance Goth (seemingly) meets his end he is visibly shaken. He survives the final battle but seeing as a number of owls was last seen in hot pursuit his ultimate fate remains unknown.

Noteworthy to mention that he bears a striking resemblance to the animated incarnation of Bathsheba. 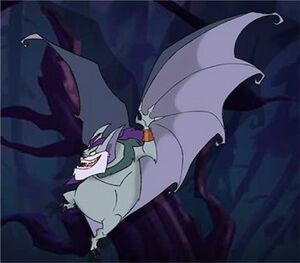 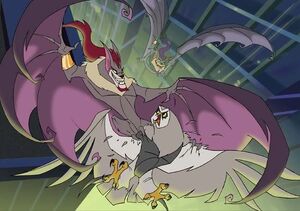 Add a photo to this gallery
Retrieved from "https://villains.fandom.com/wiki/Throbb?oldid=3460741"
Community content is available under CC-BY-SA unless otherwise noted.