Thugly (Mauvy in French Version) is the boss of Cliff in Donkey Kong Country Returns who seems to be related to Mugly, the boss of the jungle world.

Thugly looks like Mugly, except that he has iron plates on his back (similar to an armadillo), sharper teeth and purple skin. His eyes are red and his horns are also sharper. Basically, it's just a lot harder to fight Mugly.

When Donkey and Diddy Kong go to a hideout in the mountains, they see Thugly munching their bananas. Suddenly, the Tiki Tak Tribe appears and Xylobone hypnotizes Thugly to fight the Kongs, which causes the start of the battle. The battle is very similar to Mugly's. In all states, Thugly will rush, tightening his plates every time he skids. When the plates on his back stay open, you have to jump on him. In all states, he will quickly charge into the wall so far from him and will drop stones, thus becoming so stunned and falling on his back, after which you will have to jump him on the belly. It will also jump and crash close to you, producing a destructive and harmful shockwave. After three strokes, it will turn orange. In this state, he will be able to fire a fire (like a dragon) that extends throughout the arena, under which you must stoop. After three more moves, it will turn red and can now spit meteorites. The meteorites were divided into three smaller ones in the air. After each state transition, he crashes, bringing the Kongs and himself closer to the bottom of the canyon. After defeating him, DK will hit Xylobone and end the scene. 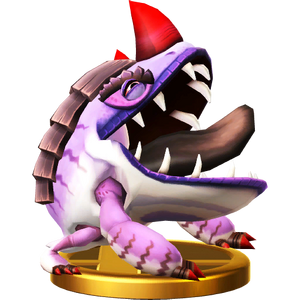 Thugly's trophy in Super Smash Bros. for Wii U. 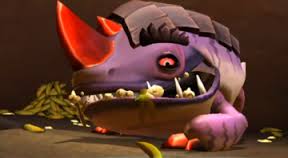