Losers (by Steve)
Ruffians (by Captain)
Bitch (by Steve)

Take their revenge on Steve (failed).

The Thugmens are the three main antagonists from the second episode Tankmen 2 from the Newgrounds webseries Tankmen. They are a group of three nameless and thuggish mercenaries from an unknown military faction and they went to take revenge on Steve.

They were created by Johnny Utah.

The Thugmens are brutal mercenaries, violent, treacherous, thuggish, sadistic, abusive, merciless and obsessed with revenge, every time if a guest (like Steve) wins at their game, they take revenge on the guest and kill him. when Steve kills the third Thugmen, they want to kill Steve, but if the leader of the Thugmens is killed by Steve, the second Thugmen gets angry, but he was killed by Captain by firing a cannonball from his tank.

The Thugmens are very different from other known Tankmens (like Captain, Steve, Sniper and Bill) and known Henchmens (like the Bad Captain, Tim and Skittles). They are black armor with black boots and black gloves, they are a white breastplate with white epaulettes adorned with white spikes. The head of the Thugmens has a helmet similar to an American football helmet and is armed with a knife, the second Thugmens has a hockey mask with hair (reminiscent of Jason Voorhess) and is armed with a hockey stick on ice and the last Thugmen has a biker helmet and he does not have a weapon.

While Captain quietly drinks his beer in a bar called Frank Spirits and Bowling, Steve plays with the Thugmens by throwing paper origami, Steve launches a high-five with the Thugmens, but the Thugmens refuse to do high-five and they want take revenge on Steve by showing him a knife, Steve says a last word to the Thugmens to pull his tongue out.

Playing the game a second time, Steve launched a second origami on the head of the Thugmens leader, Steve is happy to win, but the Thugmens want to immediately take their revenge against Steve, Steve notices that the helmet and the armor of the third Thugmen is made with plastic and that it's not real armor, the leader of the Thugmens voluntarily mocks Steve that Steve is just jealous that he has no spikes and style that he does, but Steve kills the third Thugmen to avoid getting into trouble.

Despite the fact that the third Thugmen died, the Thugmen leader threw the knife at Steve to kill him, but he accidentally threw him at Sniper, Steve warn his best friend Captain that a group of three thuggishs mercenaries called the Thugmens want to kill Steve to avenge the death of the third Thugmen, Steve takes the knife and escapes with Captain on his tank, but the Thugmen leader chases Captain and Steve after stealing his knife, the two Thugmens take their truck cannon in order to destroy the Tankmens' tank.

The Thugmens chase Tankmen Captain's tank with Steve by launching catapult bullets from his truck. While the Thugmens chase down Captain and Steve, Skittles spits irresistibly on the ground, but the Thugsmens truck destroys the Sniper tower and the Skittles sees the tower collapse with the destruction of the roof.

The Thugmens playing with Steve in the bar Frank Spirits and Bowling. 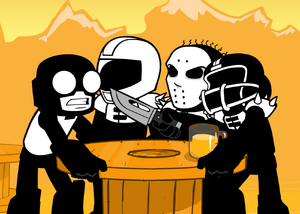 The Thugmen's leader show his knife against Steve. 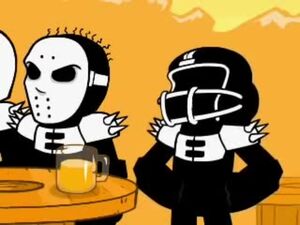 The Thugmen's leader mocking laugh, mocking on Steve that he's just jealous that Steve does not have the style he has. 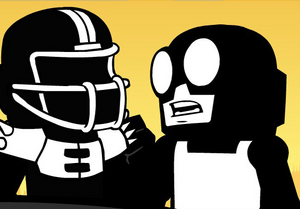 The second Thugmen's villainous breakdown, trying a last attempt to kill Steve to avenge the death of the Thugmen's leader and the third Thugmen, but he was killed by Captain with a cannon fired from his tank.