Thugs (Take to the Street)

Take to the Street

Take over the city

Destruction of the city.

The Thugs, also known as the Bad Guys, (as the title says) are the evil characters from the famous Newgrounds online video game Take to the Streets.

The video game was created on February 11, 2005 by: Gavin Davies, Jay Shieids and Gltovar.

The city gets taken over by various thugs. The laws and the orders are being ignored to the point that the citizens are in fear of getting out from their houses. It's anonymous how many thugs are there. But the heroic gavD couldn't resist anymore and went outside to defeat the evil thugs.

In the game, GavD has 5 lives and has to fight all the thugs. The first battle is on the streets, where GavD fights various thugs until he defeated them all. After he went to the park and had the same goal to defeat the thugs. Once the park is cleared, he went to the railway lines to fight with the thungs and the defeat them.

In the end he goes to the Butcher's liar, where he fights some of the thugs and fights with the biggest thug of all The Big Boss Butcher. 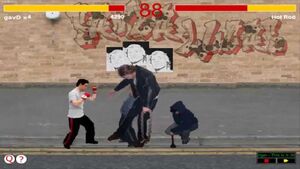 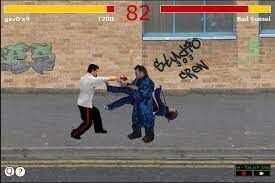