Teaming up with each other.
Trickery.
Weapons.

Overthrow Queen Mousetoria and rule all of Mousedom (almost succeeded; but then failed).

Terroristic Criminals
The Thugs are supporting antagonists from Disney's 26th full-length animated feature film The Great Mouse Detective, which is based on the children's book series Basil of Baker Street by the late Eve Titus and the late Paul Galdone. They are a gang of countless ruffians who serve as Professor Ratigan's henchmen.

They were all voiced by the late Walker Edmiston, the late Wayne Allwine, Tony Anselmo, Val Bettin, and Charles Fleischer.

The thugs are helping out with their boss' villainous plan to overthrow the Queen and become ruler and guards of Mousedom. They also tend to despise Ratigan's nemesis Basil of Baker Street due to his numerous foiling of Ratigan's previous plots. During the song "The World's Greatest Criminal Mind", one of the thugs (named Bartholomew) accidentally calls Ratigan a rat, and Ratigan has him fed to his cat named Felicia, while three of the thugs watched sadly and mourned for the loss of Bartholomew before continuing on with the musical number.

As part of the plan, Ratigan's second-in-command Fidget steals tools, gears and uniforms for the gang to use, as well as kidnapping the local toymaker Hiram Flaversham to create a robot version of the queen. Ratigan also has Fidget capture his daughter Olivia in order to blackmail Hiram into cooperating with Ratigan's plan, by threatening to sentence Olivia to death by Felicia.

Later on, when Basil and Dawson (disguised as sailors) sneak into the lair, Fidget dresses up as Olivia to lure them into a surprise trap set up by Ratigan and his men. As such, the thugs happily taunt Basil for falling into Ratigan's trap, causing him to enter into a depression.

Ratigan then orders his thugs to tie Basil and Dawson in a mousetrap. They all leave for Buckingham Palace dressed in the guard uniforms that Fidget stole for them. At the palace, the thugs manage to hijack the roles of the real guards and enter the Queen's room, delivering her a present (which happens to be the robot queen toy). Ratigan appears and orders Fidget to take the Queen away while ordering the thugs to take their places. The thugs then stand on guard during the robot queen's speech, during which, it announces Ratigan as her new royal consort, much to everyone's shock. The lizard thug manages to give notes for Hiram while the others extort him with guns to read into the robot Queen's speaker voice to say to the crowd.

Luckily, Basil, Dawson, and Olivia manage to escape the trap and manage to arrive at the palace, where they save both Hiram and the Queen and fight off Ratigan and his thugs with the help of the crowd. The thugs are eventually captured and tied up by the crowd, but Ratigan escaped with Fidget on a dirigible. It is unknown what has happened to the thugs following Ratigan's defeat, though it is implied that they are arrested for their treason. 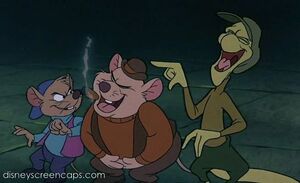 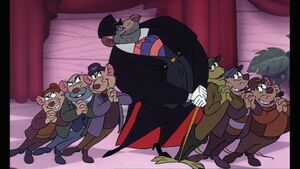 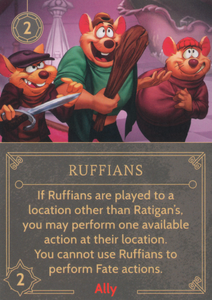 The Thug's card in Villainous. 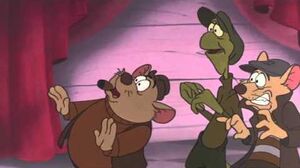