Scaring anyone who would oppose grasshoppers (particularly Dot).

Thumper is the secondary antagonist of Pixar's second full-length animated feature film A Bug's Life. He is a feral grasshopper who acts like a guard dog and serves as the pet and right-hand grasshopper of Hopper. He is Dot's archnemesis.

Thumper was later seen at the grasshoppers' home, laughing with the other grasshoppers when Hopper expressed concern about Flik standing up to him. Then he presumably killed three grasshoppers and told the others that the ants outnumbered them 100 to 1 and that they are going back to keep them in line. Thumper and the grasshoppers then flew to the anthill.

When Hopper was dissatisfied with the food, he orders that every scrap of food on the island be given to him and Thumper is shown growling at the ants. When Dot goes to find Flik, Thumper finds her and chases her until she falls off a rock (which, to the ants, is a cliff) to her supposed death. Thumper snickers before flying away, only for Dot to emerge, flying for the first time.

Thumper is shown growling at Manny when he tries to do a circus act on the Queen, but Hopper told him not to. Then a model bird the ants made is unleashed, scaring the grasshoppers, only for P. T. Flea to set it on fire who accidentally aids Hopper. When it is revealed that it was Flik's idea to build the bird, Hopper orders Thumper to pulverize him.

When the ant's revolt, Thumper tries to scare Dot one last time, only to be slapped in the face by her and being called a "bad grasshopper" and told to go home. Enraged, Thumper snarls at Dot, but only for Dim to land behind her and roar at him like an obstreperous Tyrannosaurus rex. Scared out of his wits, Thumper immediately flies off with the other grasshoppers, whimpering like a cowardly dog. After that, Dot was then saved by Dim in the process.

As with the other grasshopers, it is unclear where Thumper and his fellows went after their defeat and Hopper's death at the beak of the bird, but it is likely that they went back to the home where they came from during the middle of the film.

Thumper is very temperamental and psychotic. He is known for being primal and animalistic in terms of both mannerisms and intellect. However, even he was horrified at Hopper murdering three of his men, showing he does have some standards.

Interestingly, in the movie's bloopers where the characters of the film portrayed as actors who forget their lines, making a mistake or just being silly during filmmaking sequence, Thumper is revealed to be intelligent and persuasive, so he can speak instead of being the grasshopper gang's watchdog.

As he was snarling at Dot, he stops to rethink on how he could do better and apologizes for messing her up before saying "Can we cut? It's just that I don't think I'm coming across. Hmm. Oh! Oh! I know! I know! I could lather up a bunch of spit. Ooh, ooh, that's good. I got it, J.L. Alright, one more for me.".

Thumper is depicted as a slender grasshopper who in his debut had a leash and collar like a dog and the shape of his head vaguely resembled human skull compared with the rest of other grasshoppers. 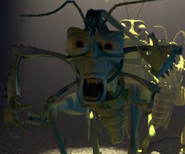