Antagonizing and attempting to kill the Hulk.

Capture the Hulk/Bruce Banner by any means necessary and to make duplications from him for the good of the US Army (formerly).

Kill the Hulk once and for all (failed).

General Thaddeus E. "Thunderbolt" Ross is a prominent character in the Marvel comic universe, where he is depicted as one of the archenemies of The Hulk. He is a high-ranking military officer (usually as a three-star or four-star general, depending on the continuity) for either the U.S. Army or U.S. Air Force (again, depending on the continuity) and was the head of the Gamma Bomb Project that resulted in Dr. Bruce Banner becoming the Hulk in the first place. He is also the father of Elizabeth "Betty" Ross, who is Banner/Hulk's main love interest.

After the creation of the Hulk, Ross pursues the creature with a growing obsession, and after learning that Banner and the Hulk are one and the same, Ross hunts Banner as well. Later, he becomes Red Hulk in order to better combat the Green Goliath.

In addition to appearing in the comics, various cartoon, and various video games, Ross has appeared in the films Hulk (2003) and The Incredible Hulk (2008) as well as in Captain America: Civil War (2016), portrayed by Sam Elliott and William Hurt, respectively. He is ranked 71st on IGN's list of Greatest Comic Book Villains of All Time.

Ross is a General in the Air Force who is in charge of Bruce Banner's gamma bomb project. His daughter, Betty, takes a liking to the young scientist, a fact which only enhances the dislike the rough Ross has for the "weakling" scientist Banner. After Banner's transformation into the Hulk, Ross spends years chasing the monster, becoming obsessed enough with it to commit treason by allying himself with the Leader, M.O.D.O.K., and the Abomination in order to destroy the Hulk. Dishonorably discharged, he shows up at Betty and Bruce's wedding with a gun, and shoots Rick Jones. He is recruited by S.H.I.E.L.D. agent Clay Quartermain to merge with the electric creature Zzzax, a process that gives Ross superpowers, but also makes him mentally unstable. He is later restored to human form but retains some residual energy-generating powers.

Finally, a mutant who drains people of their life energy attacks Gamma Base in search for a strong host, in this case the Hulk. After witnessing Rick Jones (who was the Hulk at that time) and Banner heroically engaging the mutant, Ross, realizing that he has been wrong about the Hulk being a mindless monster, saves his daughter from being slain by allowing the mutant to latch onto him, and discharging the energy resources he retained from Zzzax. Giving his blessing to Bruce and Betty, he dies in his daughter's arms.

Ross' body is later stolen by the Leader, who uses the powers of one of his followers to resurrect Ross. He turns him into a mindless replacement for his fallen soldier Redeemer. Ross is eventually recovered and revived by agents of the alien Troyjan, and returns to the Air Force. He would later come up with a more cost-effective method of confronting the Hulk when he is in his childlike stage: active non-resistance. He and his men simply do not fire on or engage the Hulk in any way. The Hulk, confused, does not smash and leaps away.

Ross would make friends with Banner, but when Betty is seemingly killed due to what both Ross and Banner believed to have been Banner's gamma-irradiated DNA interacting with hers, he once more pursues the Hulk with a vendetta.

Around this time, General Ryker takes over the pursuit of the Hulk. Ross is indirectly involved, observing when Ryker mentally tortures Banner to try to figure out how the Hulk works. The Hulk escapes from Ryker's control and after several adventures, is lost in space.

After the Hulk returns from exile and initiates "World War Hulk", General Ross, now wearing the stars of a full general, makes his own return, electing to bring the fight to his nemesis once more after Iron Man is felled by the Goliath. After a failed assault on the Hulk, Ross and his men are captured and placed in chains under the watch of Hulk's Warbound, the army he has brought back from space. The Hulk is eventually defeated via satellite weapons that fire upon him, reverting him to human form.

Much as like Bruce Banner, Thaddeus Ross is relatively normal whilst in base human form. However, he possesses a decent amount of strength, speed and agility for a standard human, most likely a result of regular exercise and training. He is also incredibly militarily skilled from his years in the Army and is a master tactician and strategist. He is also very skilled at flying military and commercial planes and is adept at multiple forms of guns and melee weaponry (ex. chains, swords, hunting knives etc.).

Prior to his battle with the Omegex, Ross was also able to absorb external energy forces in order to trigger an immediate transformation event at times of extreme peril and weakness. He was also able to generate high electrical impulses as a side effect of his mental binding with the Zzax creature. This bond remained for a long period of time, and he was able to use it in Red Hulk form to force Zzax to retaliate against MODOK Superior. This ability, as with the energy absorption, has seemingly been nullified ever since.

After Intelligencia made their experiment on Ross by his request, he gained the ability to turn into the behemoth in the form of Red Hulk giving him massive levels of physical strength, durability and healing factor. One of the differences between Red Hulk and Green Hulk is that Ross doesn't turn into Red Hulk when he gets angry but only by willing it. Another difference is that Red Hulk won't turn back to Ross when he gets KOed but his transformation from his human for to Red Hulk for and vice versa is totally based on his will to transform.

In Red Hulk form, Ross displays an incredible amount of strength. As with The Hulk, Red Hulk can lift with incredible ease more than 100 metric tons and have a strength threshold far beyond what has been currently seen, although his strength is hampered by his heat generation and lack of a similar strength building mechanism as his green ancestor.

While as the Green Hulk can build upon his strength through gamma generation in his cellular structure to even greater levels, Red Hulk has, so far, been seen as being unable to perform a similar feat, most likely due to the complex radioactive and cosmic cocktail that helped create him in the first place. However, he did display prominently an ability to forcibly drain the energy out of an enemy though physical contact (or even close proximity to his body) and use it to magnify his already huge power level.

The most impressive showing of his strength is holding his own against warious Marvel Powerhouses like Green Hulk, Thor and Angrir (The Thing amped by Asgardian Magic and Uru Hammer) as well as easily overpowering the likes of She-Hulk, Abomination and A-Bomb.

Red Hulk has an incredibly durable body, and has physically been able to withstand a direct blow to the face with Thor's hammer Mjolinir, only to laugh it off with only an "X" caved into his face. He has also taken on multiple super-humans at one time, effectively shaking them off and decisively beating them multiple times. Though Powerhouses Such as Hulk, Thor, Angrir and Iron-man still damage him, and in time it may result in a KO.

His skin and muscle, being as thick and dense as it is, allows for Rulk to survive deep sea depth equal to those seen in the Marianas Trench with no ill physical effects outside of the need for oxygen. He can also withstand direct contact with molten lava and can operate in a fiery environment with little worry of external damage. His body is tough enough to survive the conditions of space itself, at one point not only jumping to the moon while dragging Thor behind him, but also leaping back to Earth and surviving unscathed a deep crater-forming impact.

However, unlike the other Hulk, the Red Hulk in particular has a weakness to sharp objects. Characters such as Wolverine and Punisher managed to pierce the Red Hulk's hide.

Rulk has an almost unending supply of stamina, able to theoretically fight for days on end without stopping. He can also force himself to stay awake for several months, functioning solely of adrenaline and lingering stamina. He can also recuperate immensely quickly lost stamina; he'd be able to jump back into the fray of battle, even after being impaled, gutted etc.

Red Hulk can function for extended periods within intake of food, oxygen and water. However, it is seen that he oftentimes eats whole carcasses of cooked animals (ex. deer, cows etc.) and might signify an energy balance factor seen primarily in shrew-like animals, where to maintain an extremely high body temperature and subsequent physical energy, the body requires immense intake of protein. However, as he is not seen to eat in bulk often, it is unsure whether this is the case or not for Red Hulk, or even the Green Hulk for that matter.

While Green Hulk increases his strength with his rage, Red Hulk unleashed high temperatues and heat from his body which is hotter and hotter the more inraged he is. A significant downside that Red Hulk has compared to the green Hulk is that his body cannot support the intense heat he generates if his temper flares out of control. Unlike most creatures that would normally just sweat it out, the heat is so intense that every liquid would most likely evaporate instantaneously, essentially baking Red Hulk from the inside-out. This in turn makes him very dizzy, lose conscious control of his body and cause intense pain if allowed to increase further. 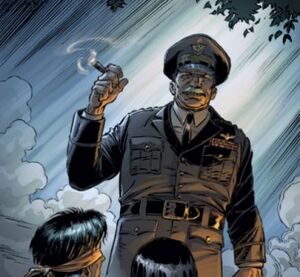 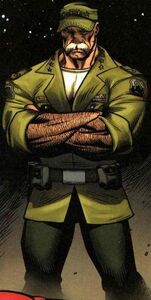 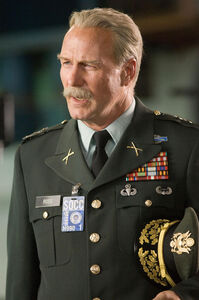 William Hurt as Ross in The Incredible Hulk. 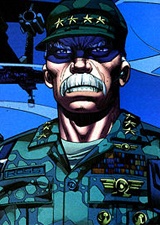 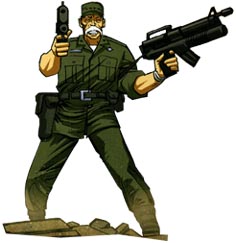 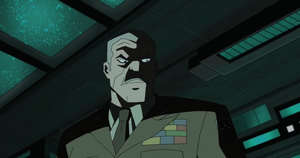 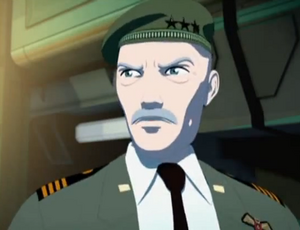 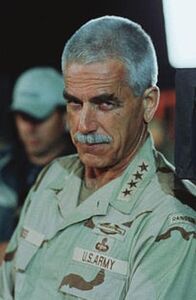 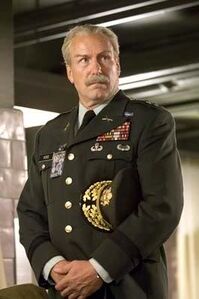 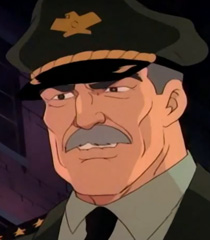 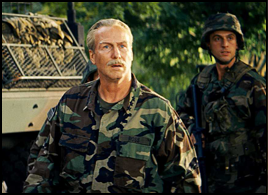 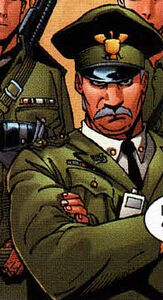 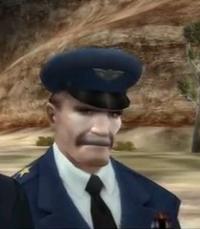 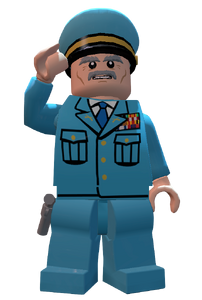 A Lego Figure of General Ross. 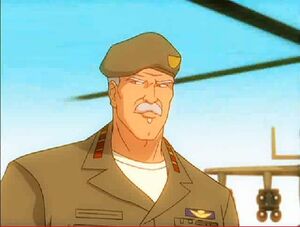 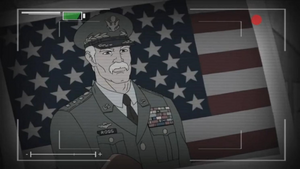 Retrieved from "https://villains.fandom.com/wiki/Thunderbolt_Ross?oldid=3499319"
Community content is available under CC-BY-SA unless otherwise noted.