Thundercracker is a Decepticon and one of the clones created by Starscream in Transformers: Animated. Starscream created him to portray his selfish part of his personality.

Thundercracker was created as a clone representing the selfish part of Starscream’s personality, and like Starscream, he only cares about himself. And he really doesn’t care about anything else, like Starscream.

When Starscream started creating clones that depict one part of his personality, he created Thundercracker to depict his selfish part. And with his and all the other clones, Starscream was going to destroy Megatron and seal his fate as the true leader of the Decepticons. And when Megatron completed the space bridge and was going to lead the Decepticons to conquer Cybertron when the Autobots defense was at its weakest, Starscream led him and the other clones to fight Megatron and his troops before the conquest began. And when he and the other clones attacked Megatron under the leadership of Starscream, they first concentrated their battle firepower on Megatron, but during the battle he fought Mixmaster, and Mixmaster shot him with a cement, and he couldn’t move. And stuck in the cement, another clone, Skywarp, and the Autobots agent, Blurr, also got caught in the cement with him, and after that they got caught in a space bridge when Bulkhead didn’t set coordinates, and after that they were in some far corner of the universe. And when he, Skywarp, and Blurr got out of the cement, Blurr was fleeing and he and Skywarp started firing at him, but they didn’t hit Blur, and he escaped him and Skywarp by running through space. 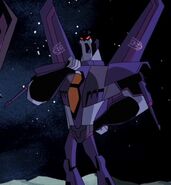 Thundercracker only praises himself