Goddess of all Chromatic Dragons

Ruling over her dominion of Hell.

Tyrannical Dragoness
Tiamat is the goddess of all Chromatic Dragons in Dungeons & Dragons, most notably appearing in the cartoon adaptation. She appears as a five-headed dragon, with each head that of one of the five races of Chromatic Dragon; black, blue, green, red, and white.

In the TV show, Tiamat acts as an adversarial third party, battling the Dungeon Master's disciples and Venger alike. She is claimed to be the most powerful creature in the realm, feared even by Venger. She appears in many places, but her lair is the Dragon Graveyard, where she protects the bones of the dragons who go there to die, as well as some magical artifacts like the ones that the Dungeon Master gave to the heroes.

During the attack against Neverwinter City led by the Cult of Dragon, it soon became clear that the Cult's ultimate goal was to summon Tiamat herself from the Nine Hells. Unfortunately, it was also clear that it was too late to prevent this; the only solution, therefore, was to try and push her back before she fully entered Toril. Led by Elminster, the Harpers, Zhentarim, Lords' Alliance, Emerald Enclave, Order of the Gauntlet, and Iliyanbruen banded together and traveled to the Well of Dragons to assault Tiamat's Temple itself, which had already erupted into the world. There they were joined by Linu La'neral, as well as a member of the original Cult of the Dragon who disagreed with Severin's new direction. There they faced opposition from not only the Cult of the Dragon and Thayan forces, but the five chromatic dragon heralds of Tiamat: Glycaemia, Rogrotus, Volzakaris, Kradazuur, and Hohengroth.

After defeating Tiamat's heralds, the alliance ultimately led an attack into the Temple of Tiamat, where Severin Silrajin and Rath Modar were in the midst of summoning Tiamat from the Nine Hells. Though the summoners were slain, they successfully summoned Tiamat, who began emerging into Faerûn. Fortunately, Linu La'neral was able to channel a spell to weaken the dragon goddess long enough for their allies to defeat her, pushing her back into the Nine Hells and putting an end to the Cult of the Dragon's plot.

In the Dragonlance novels by Tracy Hickman and Margaret Weis, a version of Tiamat called Takhisis appears as the main villain of the first trilogy.

As the queen/goddess of the Chromatic dragons, Tiamat is a tremendously powerful beast. She is very strong, and each of her heads can attack with one different elemental spell: fire (red), acid (black), poisonous gas (green), lightning (blue) and ice (white). Her massive wings allow her to fly, but she can also open interdimensional portals to travel long distances. Tiamat's massive size and hard scales protect her from most sources of damage, including magic. However, the episode The Hall Of Bones shows that she is weak against the Dungeon Master's magical artifacts, which explains why Venger wants them so much.

In Dungeons and Dragons lore, Tiamat can also transform herself into a humanoid form. 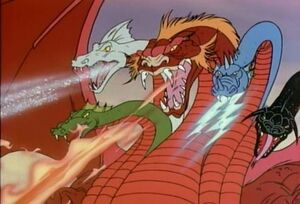 Tiamat in the cartoon series. 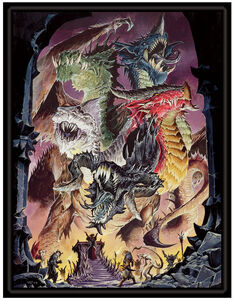 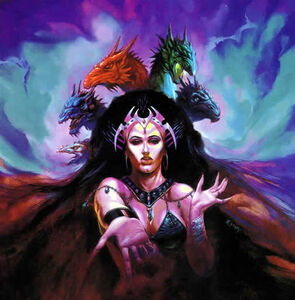 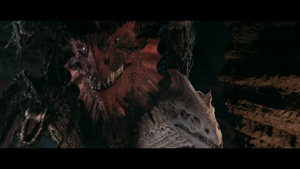 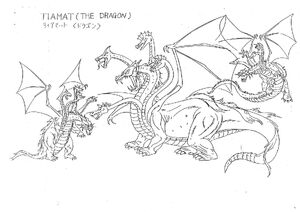 Model sheet for the cartoon