Tibicenas is the eighth Lord of Chaos. Tibicenas is a chaos-infected Djinn who lives in the Djinn world and acts as a servant to the mage of the sands Zahart, who can summon him with a chaorrupted magic ring.

In order to combat Tibicenas, the heroes and Zhoom had to find the mummy king Sek-Duat: God-King of the Sandsea who might know what they needed to know in order to do just that. Indeed, Sek Duat knew how to do battle with Tibicenas himself: the only way to defeat him was with another Djinn, thus meaning that the heroes and Zhoom had to find their own Djinn to use against him!

It is according to fellow Djinn Saahir, a Marid (benevolent Djinn) that Tibicenas was once a regular Ghul (malevolent Djinn) until he meddled with Chaos, causing the ruler of the Djinn, the Efreet, to cast him out of the Djinn world. Tibicenas is secretly waiting for the right moment for the ring to be destroyed so that he can be free to return to the Djinn world to conquer that and then come back to conquer Lore itself. 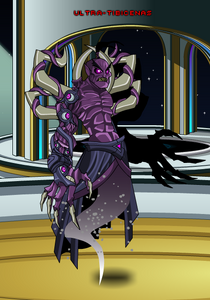 Tibicenas
Add a photo to this gallery

Retrieved from "https://villains.fandom.com/wiki/Tibicenas?oldid=4227227"
Community content is available under CC-BY-SA unless otherwise noted.