Spy Kids 4: All Time In The World

Travel through time to meet his father (as Danger, failed).

Help his alternate self, the Timekeeper, to succeed where he failed (as Tick Tock, temporarily succeeded)

Tick Tock is main antagonist of the film Spy Kids 4: All Time In The World. He is the first villain to appear in the movie and was tasked to steal OSS technology. Unlike his boss' other masked minions, he wears goggles and has long hair. The Timekeeper's masked minions recognizes him as the higher authority and usually follows his lead. He is a result of the Timekeeper's several attempts to travel back in time.

He was portrayed by Jeremy Piven, who speaks in a high-pitched clown voice, who also played Timekeeper in the same movie and Dean Gordon Pritchard in Old School

As a child, Danger was accidentally frozen in time in a science project led by his father. Danger spend decades frozen, forced to watch his father getting older and older until he died. When Danger was finally freed with the use of the Chronos Sapphire, he realized that so much time had passed that none of his friends or his father were still alive.

As an adult, Danger decided to go back in time to reunite with his father and spend more time with him. However, this resulted in alternate versions of himself, one of them calling himself Tick Tock while the others became the henchmen of Danger.

Together, the alternate Dangers try to assist the prime version, who obtained the identity of the Timekeeper and is unaware that Tick Tock or his henchman are alternate versions of him. Tick Tock purchases a stolen mini disk from the OSS which contains information about Project: Armageddon. Tick Tock is arrested, but he later escapes and reunites with his other selves. He is then tasked to steal the Chronos Sapphire, which is inside the jewel of Rebecca's necklace.

When Rebecca and Cecil enter Tick Tock's hideout, which is hidden in a clock shop, they are attacked by Tick Tock and his henchmen. Tick Tock takes the Cronos Sapphire and captures the kids, who are rescued by Marissa and Carmen.

The twins then realize that Danger is the Timekeeper, as he wears a watch similar to Tick Tock's and his name is the anagram of "Armaggedon". Sneaking into his lair, they are captured by Tick Tock while Danger freezes all OSS agents in time and does the same to 18 major cities. After being told about Danger's plan, Cecil deduces that Danger already did this before and it resulted in alternate versions of himself. he then takes Tick Tock's goggles, revealing that Tick Tock and the Timekeeper's henchmen are all alternate versions of himself. Rebecca tells Danger that he will fail again and that instead of trying to get more time, he should try to spend the time he has wisely. Tick Tock however insists that this time, Danger will succeed. Danger then uses the time vortex to go back and meet his father. He returns as an older version of himself, informing the kids as well as his other selves that he met his father, who told him the same as Rebecca. Danger then deactivates the device. Tick Tock, refusing to give up, takes the necklace, informing the kids that he will just try again and again. However, at this point, he is apprehended by Wilbur and arrested for his villainous actions. 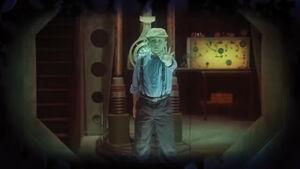 Danger/ Tick Tock/ Timekeeper as a child, being frozen in time 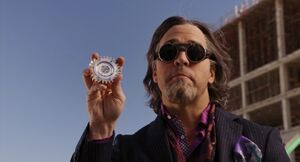 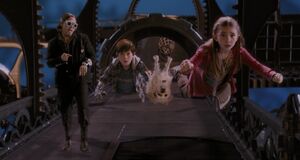 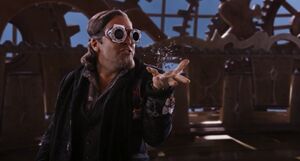 Time flies when you're having fun. 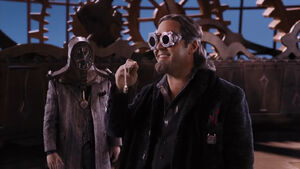 Tick Tock and his alternate self, Timekeeper 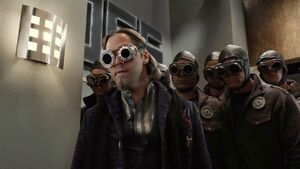 Tick Tock with his minions. 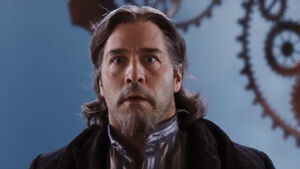 Tick Tock without his goggles, being revealed to be an alternate version of Timekeeper/Danger himself. 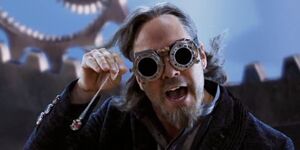 Tick Tock holding the necklace, just before he gets arrested from Wilbur. 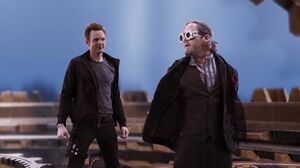 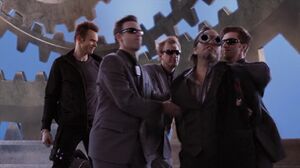 Tick Tock's arrest and being carried away by OSS agents. 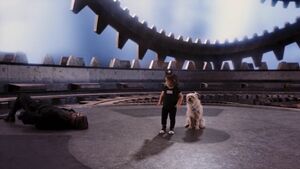