Be reborn and destroy the world (failed).

Tierra was created through unknown means around the same time as its counterpart Sophia. Both were beings capable of creation and destruction, each choosing to specialize in one while have the other as a utility. Whereas Sophia wanted to create a world of stillness through peace, Tierra wanted a world of stillness through an absence of life. Thusly, it seeded the evils of the world, one being the pure evil Steelswarms.

Sophia didn't want Tierra's desire to ever come to fruition, so Sophia sealed Tierra in a machine underneath the Sacred Tree that regulated her energies throughout the planet. She then fragmented the core used to access the machine and hid its pieces away in a land that was nowhere near the tree. These fragments are the pyroxene would eventually bring the Gem-Knights to life.

Though Tierra was trapped, it still had hope of escaping from the Sacred Tree. When the Lswarm virus mutated into the Shaddoll Virus, Tierra was able to take control of all beings who were infected by it. Its master plan was to use the Shaddoll Virus and Gem-Knight Lapis' power of creation to free itself and make a powerful body with which to destroy the world. Tierra had managed to take control of Lapis by creating the Construct around her as its enforcer. However, a problem arose when it discovered Lapis was dead, so it needed to bring Lapis back to life before it could destroy the world. It had Shaddoll Winda attack the Sacred Tree to make getting free easier, but before Winda or the Construct could do any real damage, the "Apoqliphort" program activated and the Tree started defending itself from them. Winda was subdued by a Qliphort Scout, while native lifeforms attached the Construct to Apoqliphort Towers and then froze them both.

However, the defenses made an error by absorbing Winda, which allowed Tierra to hack their programming and spawn new servants: the Infernoids. Exactly 9 Infernoids were dispensed to try and destroy the Sacred Tree, but the native lifeforms managed to destroy them. One Infernoid was tasked with using the power of the Ice Barrier dragons to unfreeze the Construct. It succeeded, although the Construct was no match for Tellarknight Ptolemaeus. Ptolemaeus shattered both Devyaty and the Construct, although they both survived being ripped apart.

Infernoid Decatron (Devyaty's head) discovered Tierra's body in the Sacred Tree and hacked the machine's system to let Tierra loose. Tierra then used its Necromancy to bring Gem-Knight Lapis back to life inside the Construct. With its newfound power to create, the Construct fused with Tellarknight Ptolemaeus and Infernoid Decatron as preparation for Tierra's ultimate form. Meanwhile, Tierra went and devoured the bodies of the dead Infernoids and Apoqliphort Towers to gain their remaining energy. Tierra combined itself with the Construct to transform into Tierra, Source of Destruction.

Due to the full rebirth of Tierra, the machine under the Sacred Tree started glowing with the power of the pyroxene. The machine revived Cairngorgon and the Shaddoll Core and merged them with the 10 pyroxenes, creating Zefraath. Zefraath and Tierra then fought a battle that lasted for over 3 years. In the end, Tierra is finally destroyed along with the Construct.

Being a machine, Tierra has no qualms about destroying life, nor does it understand why life even needs to exist. It is cold and harsh in its actions, and it doesn't regret standing by its convictions.

Initially, Tierra is presented as being powerless, seemingly having no influences on anything due to being trapped. However, even while trapped it could take full control of beings infected by the Shaddoll Virus and upload regular computer viruses to regular machines through interaction with the Shaddolls.

As a deity, Tierra controls life and death in their individual forms. Though it prefers to destroy, it has the ability to bring other beings back to life. As Infernoid Tierra, it also had pyrokinesis and could infuse its power of death into its flames to make them lethal upon contact. As the Source of Destruction, Tierra had increased strength due to adding Apoqliphort Towers onto its body.

Infernoid Tierra's in-game effect forces both players to send cards to the graveyard from card slots that are not the field upon being summoned. The locations of the cards being sent from is dependent on the number of monsters used to fusion summon it and the effects stack. If using the bare minimum of three monsters, it sends three monsters from the extra deck. Five forces both players to mill three cards, eight returns up to three from the banished pile, and ten forces both players to discard their hands. Infernoid Tierra is only used in decks as a body, not to be summoned as intended. The primary card used to summon it benefits other Infernoids because it sends up to 10 different ones to the graveyard from the deck. Its other usage comes from the fact that it names two of its fusion materials, allowing them to be added to the hand by certain cards.

Tierra, Source of Destruction's in-game effect shuffles all cards besides itself into the deck from every location upon being summoned (except banished pile). If successfully summoned, the opponent is also prevented from using any of their cards to stop it. This also forces the opponent to only use cards they draw henceforth, assuming they had enough energy to survive an attack from Tierra. 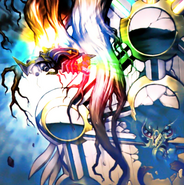 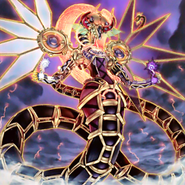 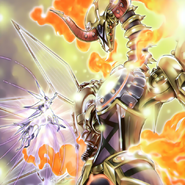 The final convergence of Tierra and the Construct. 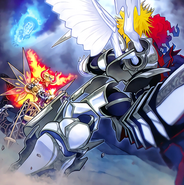