Leader of the Tiger Soldiers

Planning to take over the world.

Take over the world (both failed)

He was voiced by Ken Pontac.

The Tiger General is a blue tiger. He wears a one-eye goggle with a X on the lens to cover his lost left eye, and a tortola harbor blue military uniform with a coat, epaulets, hat, one dark blue-gray glove, and boots. He has a metallic clamp in place of his left hand as a prosthetic that can cut through flesh and bone in one slice.

The Tiger General is first seen at his base when he discusses his plan for world domination as he laughs evilly. Flippy sends his friends, Sneaky and Mouse Ka-Boom to kill the soldiers, while he heads to the base to present himself as a pizza delivery man. Flippy has replaced a slice of pizza with a knife and tries to throw it, but ends up throwing a slice at the General, blowing his cover.

The General orders his soldiers to kill Flippy and they chase him. Flippy tries to kill the soldiers with his knife, but unfortunately, he throws it at Sneaky instead. Mouse Ka-Boom throws a bomb into the base and the soldiers flee. As the General prepares to have his pizza, the bomb bounces off the pizza and it lands in Mouse Ka-Boom's hands. Mouse Ka-Boom tries to get Flippy to help him get the cheese-covered bomb off his hands, while Flippy tries to remove the knife from Sneaky. However, as he does so, he ends up killing Mouse Ka-Boom, revealing a heavy amount of explosives in his bag. The bombs explode and Flippy finds himself in a different location.

The General and his soldiers head out to kill Flippy and Flippy hides in Sneaky's corpse. They arrive at the scene and try to figure out where Flippy went. As Flippy whimpers in fear, he snaps and turns into Fliqpy. Fliqpy emerges from Sneaky's corpse and manages to kill all the soldiers. A fight is ensued between Fliqpy and the General and the General manages to cut off Fliqpy's hands. As the General grabs his knife to finish off Fliqpy, Fliqpy manages to rip open his stomach with his sharp arm bones. The General tries to strangle Fliqpy with his bowels, but Fliqpy pushes him away, sending them falling into a ravine. They fall into a log and Fliqpy manages to kill the General by crushing him with the log.

As Fliqpy infiltrates the second base, he presents the soldiers with the General's face sliced up as a pizza as he laughs maniacally. 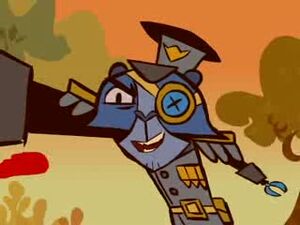 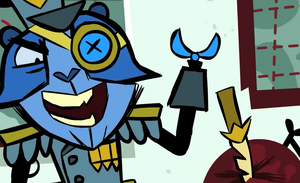 Tiger General's evil laugh.
Add a photo to this gallery 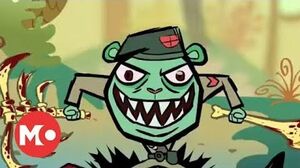 Retrieved from "https://villains.fandom.com/wiki/Tiger_General?oldid=4380146"
Community content is available under CC-BY-SA unless otherwise noted.