Sell the stolen weapon as her bonus (failed)

Tiger Lucy is a minor antagonist in Kong: The Animated Series. She is one of the henchmen of Professor Ramone De La Porta

Tiger Lucy is an art dealer who helps the Tannenbaum family, being around the same age as Eric "Tann" Tannenbaum and Jason Jenkins. It is implied she has a crush on or is in love with Tann

Just like the other henchman, Tiger Lucy also uses her cyberlink that was given to her by De La Porta to become a giant monstrous cat, which she does with her own pet cat, and can be seen in her first debut in the episode "The Giant Claw Robberies" and "Framed". She is the only one of the main five De La Poera henchmen who doesn't participate in the kidnapping pf Jason in "Lies", making her the only henchman who is not trapped on Skull Island..

Tiger Lucy's first time seen is as a thief who use a cyberlink to become giant humanoid cat to steal an artifact in a museum. The police found her giant footprints and conclude the thief must be "a giant cat burglar". She later attends the grand opening of De La Porta's museum and meets Jason along with his friends. Tiger Lucy flirts with Tann and invites him to De La Porta's private room, where Jason and Lua follow them. Tann introduces her to Jason and asks why she in the museum. She explains that she helps De La Porta in running his enterprises, but he hasn't come to the grand opening in order to attend to another business. She tells to them to join the grand opening party without him, and subtly mocks Lua's serious nature, which makes her annoyed. After separating, she secretly goes to basement and finds De La Porta there, having waited for her to provide another mission for her.

Several hours later, she begins to infiltrate the other museum. However, before she could escape with the artifact that she stole as a giant humanoid cat, Jason and Kong quickly appear to try to prevent her from escaping, but are interrupted by Omar, who uses his own cyberlink to take on the form of a giant humanoid rat. Kong successfully defeats both of them, and they revert to human form again and run away. Tann is shocked to see that Tiger Lucy is the cat burglar. De La Porta, however, has already set a trap for Jason and his friends, which frames Lua to make people believe that she is the cat burglar instead. A furious Lua tells the police that Tiger Lucy is the real cat burglar, but due to having no evidence to proof it, the police don't believe Lua and arrest her.

Jason and Tann manage to save Lua, at same time De La Porta and his henchmen decide to bring the artifact to his museum. However, they failed to bring it as Omar decided to leave the artifact behind due to being chased by Kong, who arrives and chases De La Porta with Tiger Lucy in a taxi, forcing them to go into hiding.

Tiger Lucy accompanies De La Porta to check a temple and find a Primal Stone of Soul. When he successfully finds it, he uses it to control Tann and Caroline. When Tiger Lucy manages to check the situation near Kong and De La Porta fight's (the latter in the form as a giant humanoid jaguar), Lua easily defeats her and forces her to leave Tann and Caroline alone.

Tiger Lucy and Giggles are ordered by De La Porta to steal an ancient totem in a cave. When they enter the cave, they are attacked by the trap which already set in there, and save Giggles who almost fall into the trap. When they continue to search it, she found the item that De La Porta means (a cricket totem), and said that he must be pleased with it. She and Giggles bring it to the museum with helicopter, not knowing that the cricket in the cave tell to the old Shaman about their presence.

Tiger Lucy accompanies Omar as giant-humanoid baboon to steal arms. After they success to stole it at set a trap to frame the heroes, De La Porta congrats to her due she do her job very well and wanted to need more complimentary help by her. Tiger Lucy feel delight ,and tell to him if he get the money she must have it too, much annoyed him. Next day she come to De La Porta office to inform that the agent already come to campus to search Jason and his friends due the fake evidence that they put to framed them, De La porta glad that his plan already successful and tell to her about the next happen that will be happened on Jason and his friends and call the agent to come to campus.

In the night, She observer the other henchmen to put the arms to the plane. De La Porta come and tell to them that he decide to change his plan , and wanted Tiger Lucy to keep her eyes by observer Frazzeti and Giggles to put the arms. When her cat start hissing, and realized Kong and Lua come toward them, She order Frazzeti to shoot at them but fail. Realized she has no time to bring all the arms, she decide to destroy the arms and runaway.

When De La Porta angered that his plan to framed Jason and his friends is failed, Tiger Lucy express her disappointment because that the arms that she wanted to sell as her bonus already destroy. De La porta annoyed with her because she only thinking about money, but she casually tell to him that she can't help and He never inspire her with anything. As a result, De La Porta decide change his plan to bait Lua and Kong to the port, and once again need her help to caught them. In the port, she success to anesthetize her and make her unconscious. De La Porta praise her job, and tell to her that they need to wait the agent to come to the port to caught Lua. However, when Tiger Lucy check on Lua, she is slipped by her and fell to the craft of arms. Angered, Tiger Lucy use her cyberlink and merge with her cat to become giant-humanoid cat. She have fight with Kong while Lua being attack by Omar as giant humanoid-baboon, but she easily defeat by Kong. When the agent manage to caught her, Tiger Lucy is quickly saved by Omar and De la Porta, escape from the port.

Return to the Redwoods

When Jason and his friends search a ancient item along with Primal Stone of Time, De la Porta along with Tiger Lucy and Omar try to steal it from them. When De La Porta about to take the item, and put the Primal Stone of Time on it, and start to make a quake in a temple. Jason and the other escape, they chase them and De La Porta order to Tiger Lucy to shoot at their car. After their ambush ended in the river, and man's car machine start explosion, She along with Omar hold the Man and The woman with a gun as hostage, and release them when Jason willing to give the stone to De La Porta, and escape with their helicopter.

The next day, De La porta, Tiger Lucy and Omar use the primal stone to visit a past time of Redwoods (a location where Dr. Jenkins and young Jason house placed). When they do a infiltration, they stopped by Jason and Tann. When the mysterious chemical start to cause a quake, she start to attack Tann but he quickly to hold her, but Tiger Lucy able to release it, and lock Tann to the basement. When Tiger Lucy wanted to shoot Jason with a gun, she later being foiled due the fact the gun that she hold is a water gun, much her annoyed and kick Jason to out from the lab.

When Kong is arrive and everyone try to catch the mysterious chemical, she try to help them to catch but Lua quickly stop her along with Tann. De la Porta along with her and Omar being tied, but they success freed with the primal stone and go to another past time.

De La Porta along with her and Omar arrive in the unknown past time. She complain about the rain meteor and Omar feel there is something wrong in the place. When De La Porta claims that he can control the nature because of luck, Tiger Lucy angry at him and tell that they not control anything anymore, knowing its a incident and ask to him how they can return to current time ,but De La Porta denying about her statement.

When they start to go to somewhere, they begin attack by two T-rex. De La porta order to them to shoot it, but its fail. Tiger Lucy ask if they need a cyberlink or not, De La Porta answer that the cyberlink is not work in the past and decide to save their self to the cave. When the t-rex start to destroy the cave, Tiger Lucy found the other way to runaway from the T-rex. De La Porta and his henchmen investigate the way, and then they found a ritual place that can connect the all primal stone to get the power. When De La Porta use it a summons Chiros, they can see that Chiros didn't grant him a power, and tell to De La Porta to runaway from Chiros. When De La Porta start being control by him, Omar quickly save him and they are runaway, which at the same time Chiros summons his minion to chase them.

Luckily, they are save by Kong and Kong Ancestor. When Kong and his ancestor success defeat one of chiros minon the great shaman use the stone to teleported them back to current time, which she along with De La Porta and Omar teleport back to De La Porta museum safely.

Tiger Lucy was known to be very sly, easy-going, selfish, and apathetic.The reason why she helps De La Porta is because she wanted his money and doesn't care what he orders her to do, so long as she gets paid by him. Unlike the other henchmen, she is seldom seen together with the other henchmen, but she is usually partnered with Omar or Giggles. Although being apathetic, with her loyalty to him just for his money, Tiger Lucy is not shy in showing her confusion or anger to De La Porta about his plans and his decisions, especially in the episode "The Thirteenth Stone" 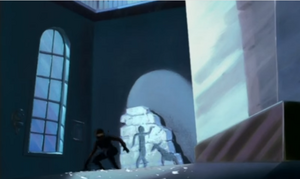 Tiger Lucy about to steal a artifact. 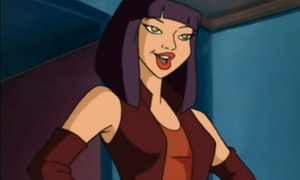 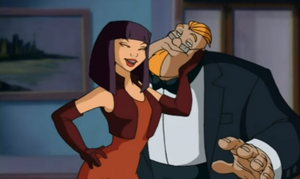 "It's been a while. Shall we get reacquainted, handsome?" 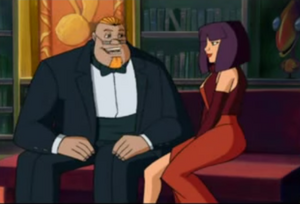 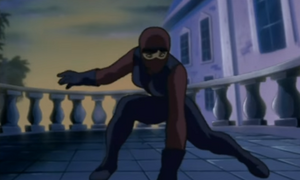 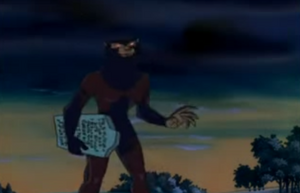 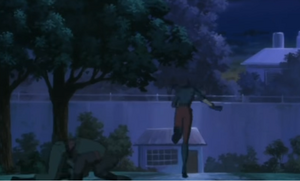 Omar and Tiger Lucy running away from the heroes. 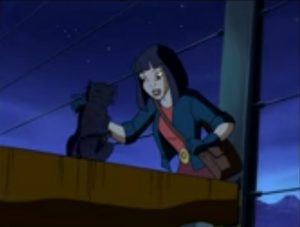 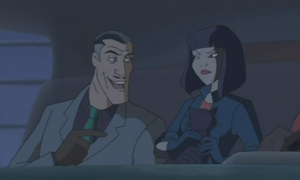 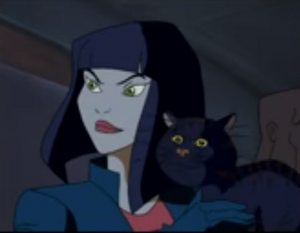 Tiger Lucy with her pet cat. 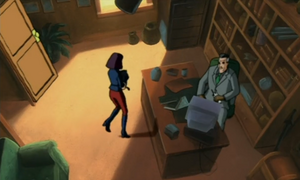 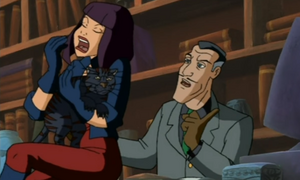 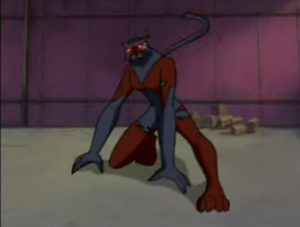 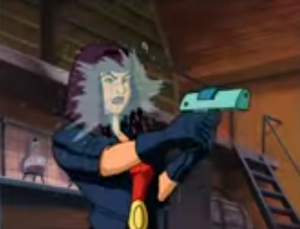 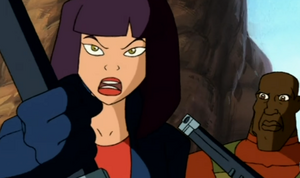