Destroying everything in his way and wreaking havoc.
Gloating about himself.

Kill Megamind for tricking him.
Have revenge upon Roxanne Ritchi for not loving him as he wanted.
Destroy Metro City (all failed).

He is the former nerdy and shy cameraman of Roxanne Ritchie who later became a vengeful, traitorous, and destructive supervillain as he was hit by the serum of Megamind. He is also Megamind's ultimate arch-nemesis.

He was voiced by Jonah Hill, who later played Donnie Azoff in The Wolf of Wall Street and himself in This Is the End.

As his former self Hal, he tends to be somewhat civil and sophisticated towards Roxanne, having a secret crush on her and would try to woo her, though she feels uncomfortable by his attempts. One example being were he invites her over to his place for a party where it's just going to be the two of them with a wedding photographer and a bouncy castle there. He also tends to be quite childish, immature (as when he throws a tantrum after accidentally slamming his hand on his news van), lazy, and incompatible (as he criticized Roxanne’s sentimental news script on Metro Man, unknowing that she had in fact written the script herself).

After being equipped with Metro Man's powers, Hal (going by the name Tighten) became more determined to use his powers to win Roxanne's heart much like how Metro Man stuck with being a hero in order to gain adoration, but his recklessness caused Roxanne to reject him, much to Hal's distress and anger and leading him down into a dark path, where he starts using his powers for nefarious and diabolical purposes. After learning that Megamind was the one who gave him the powers and was dating Roxanne at that time, Tighten became hell-bent on destroying Megamind for "stealing his girlfriend" and later causes havoc on Metro City with his powers, much to his pleasure and everyone's dismay and horror (including Megamind).

As such, Tighten is more evil than Megamind ever was. While Megamind acted as a villain to get attention and balance out of his former rival Metro Man, Tighten acted purely out of spite, caused so much destruction for his amusement, and has shown no signs of sympathy or remorse on it. He also has proven to be in denial; retorting to Roxanne that he didn't have any good in himself, and blaming Megamind for making a fool out of him (though Megamind rightfully points out that Tighten is making a fool out of himself by squandering his powers for his gain).

Tighten also proved to be quite cowardly and overwrought, as revealed when Metro Man (who is Megamind in disguise) arrives to confront him for his rampage, Tighten panics and tries to flee away, though he later learns the truth and fights Megamind for it.

He was introduced as simply being Roxanne Ritchie's nerdy cameraman named Hal. He has a crush on her, but his attempts at flirting with Roxanne only makes her very uncomfortable. While Roxanne is snooping around the headquarters of the film's protagonist, the supervillain known as Megamind, Hal accidentally gets hit by Megamind's serum, which gave him the powers of the seemingly deceased superhero Metro Man.

Megamind was planning on creating a new superhero to face after feeling isolated from his victory against Metro Man, so he tracks Hal to his apartment building and manipulates him by taking on the guise of his "Space Dad". Megamind attempts to train Hal into a hero, but unknown to Megamind, Hal is not as noble or just as Metro Man. However, Megamind believes that Hal is ready, and gives him a red-and-white suit and the name "Titan", which Hal misinterprets as "Tighten".

However, it turns out that Hal only wanted to take the superhero gig to "get the girl" by winning Roxanne's heart. The first thing he does is kidnap Roxanne under the pretense of 'rescuing' her, dropping her several times only to catch her again. Hal then reveals his identity to Roxanne but gets rejected for his recklessness, causing him to fly away in anger. Roxanne then continues dating Bernard (who is Megamind in disguise), much to Hal's disappointment and anger.

Believing that being a hero means to get the girl for himself rather than fighting for the greater good, Hal decides he is better off being a villain and goes on an unseen crime spree. After leaving Megamind waiting for several hours, Tighten meets the villain in his home. He reveals his true intentions of why he took the gig and offers a partnership with Megamind, with him as the muscular brawn and Megamind as the 'brain with glasses'. Horrified and outraged that his 'hero' turned out to be a selfish person, Megamind refuses and instead goads Tighten into a fight by revealing that he's both Space-Dad and Bernard in disguise and that he's the one who gave Tighten the powers in the first place.

As planned, Tighten battles Megamind, but with much more rage and anger then Metro Man ever did. Megamind is quickly defeated and awaits to go to jail again, but this doesn't change Tighten's decision to become a villain as the battle had instead increased his anger, and that he wants to kill Megamind rather than having him arrested. Horrified, Megamind intends to recapture Tighten by trapping him on a copper failsafe sphere, after learning that copper is Metro Man's weakness, but this fails, forcing Megamind to escape. Megamind eventually finds out that Metro Man is alive, having faked his weakness of copper and his death to retire being a superhero and focus on a career in music, as he felt tired battling Megamind and that he never had a choice of what he wants to be in life.

With Megamind on the run, the town's people initially congratulate Tighten for freeing them from Megamind but Tighten responds that he is taking over as the new villain and starts by violently flicking the Mayor off with his finger, much to everyone's shock. Without hesitation, Tighten terrorizes Metro City by burning the name 'Tightenville' into the ground in colossal letters, causing more damage to the city than Megamind has ever done. As such, the citizens attempt to evacuate the city to avoid getting into Tighten's wrath.

Feeling remorseful for letting this happen, Megamind turns himself back to prison, and Roxanne, feeling guilty for hurting Tighten's feelings, attempts to take action by appealing to Tighten's conscience. Unfortunately, Tighten denies that he has any good in him, and acts purely out of spite from being rejected by her. Tighten then kidnaps Roxanne and straps her to the radio tower where she rejected him, threatening to kill her if Megamind doesn't arrive to fight him.

Seeing this on TV, Megamind decides to take responsibility for his actions and arrives in his usual flamboyant style. He enacts a plan into freeing Roxanne and trying to stop Tighten. Tighten crushes him with the radio tower, but he turns out to be Megamind's right-hand man, Minion, in disguise. Tighten nearly kills Roxanne by shoving a bus, but Metro Man suddenly appears, splitting the bus into two, saving Roxanne. Tighten is frightened into fleeing by Metro Man's orders, but realizes that it's the real Megamind in disguise after the hero tells him to leave 'Metrocity'.

Tighten fights Megamind again and nearly kills him, but ultimately fails. Upon remembering where he left his defuser gun the night Roxanne dumped him after his Bernard disguise faltered away, Megamind takes the weapon, but Tighten throws him up into the sky before turning his rage towards Roxanne, hoping to finish her off. However, Megamind appears in front of Tighten after temporarily dehydrating himself to land himself into the water fountain where Roxanne is standing. After re-hydrating instantly, Megamind uses the defuser gun to remove all of the unearned powers from Tighten, rendering him powerless and reverting him to Hal for good. Having reveled in his real victory, Megamind saves Minion by throwing him into the water fountain, since he knows that fish need water to survive.

At the end after Hal's defeat, Megamind gets his Brainbots to repair all the damage he and Hal have done to Metro City, and he is praised as the new hero by everyone (including a disguised Metro Man). As for Hal, he is imprisoned in Megamind's old cell, serving a life sentence as punishment for his crimes against Metro City. He is seen Dancing in Megamind's old cell at the end of the movie back to his old self. 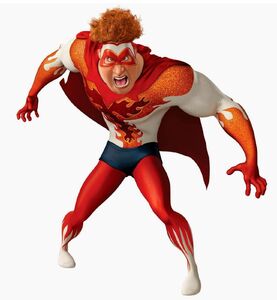 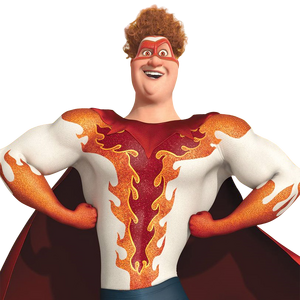 After filming Roxanne Ritchi during her news report, Hal inadvertently insults the report Roxanne written herself.

"What I was trying to say was, I can't believe that in our modern society they Iet Iike actual art get onto the news."

Hal not interested in joining the celebration in honoring Metro Man.

Hal telling Roxanne that if he were Metro Man, he wouldn't let Megamind kidnap her.

"I'd watch you, like a dingo watches a human baby."

Hal seeing that Roxanne is gone.

After Roxanne finishes her report on Metro Man's "death," Hal happily turns off his camera.

Hal seeing how depressed Roxanne is and decides to get close to her.

Hal inviting Roxanne to a party at his home.

Hal's attempts in charming and seducing Roxanne, only make her more uncomfortable.

Hal being politely declined by Roxanne.

Hal about to leave after Roxanne declines his party invitation.

Hal saying good night to Roxanne as he is about to leave.

However, when Hal has his back turned, he starts to get emotional.

Hal injuring his fingers after smashed his fist against the news van.

Hal seeing Roxanne enter Megamind's lair on her own.

Hal looking for Roxanne before he gets shot with a pellet containing Metro Man's powers.

Footage of Hal laying on the ground after being hit in the face with the pellet. 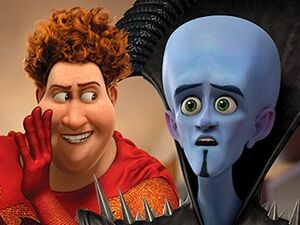 Tighten telling Megamind that he stole many things, which horrifies the latter. 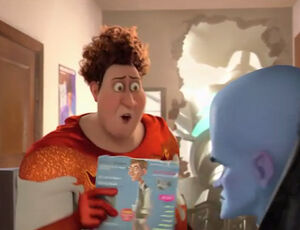 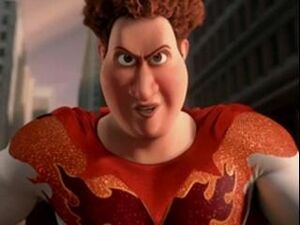 Tighten seizing power over Metro City which he renamed "Tightenville".

The "fair" citizens of Tightenville.

Hal dancing in his new jail cell.
Add a photo to this gallery 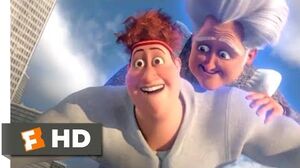 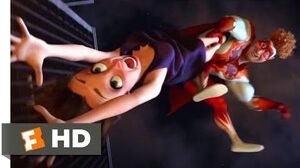 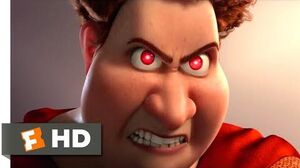 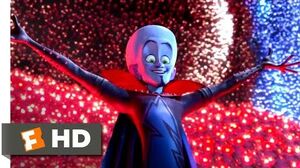 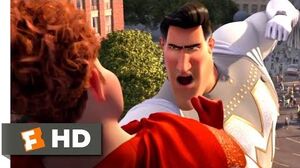 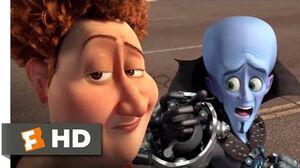 Retrieved from "https://villains.fandom.com/wiki/Tighten?oldid=4204476"
Community content is available under CC-BY-SA unless otherwise noted.