Obtaining the world's largest 72 inch TV from The Waterman International Building, so he can use it for his own leisure.

Tim Gruber is the main antagonist in the The Cleveland Show Die-Hard parody special "Die Semi-Hard". He was played by Tim the Bear, in character as Hans Gruber. He led a terrorist organization, with plans to takeover and steal from Waterman International, taking the world's largest TV set from them.

Tim Gruber and his gang of terrorists planned a takeover of Waterman International. Tim held Lloyd Waterman at gunpoint, trying to get the codes to the vault. Waterman refused to give him any information, resulting in him getting shot dead. While Tim held the desk, Cleveland McCleve contacted him, via walky-talky to tell him that he was after him and his terrorist group. Tim and the other terrorists went out in search of Cleveland. While Tim searched the halls, unarmed, Cleveland jumped out with his gun, having caught him. Tim quickly faked an American accent and pretending to be a good guy, successfully throwing Cleveland off, as he'd never seen the terrorist in person. He fakes the name "Dick Poop". Cleveland told Tim to stick with him, for safety. When they got in front of an elevator, Tim told the others where they were, so that Lester and Terry could surprise attack Cleveland, after exiting the elevator. Cleveland realized Tim's falsehood, but had no time to fight back. Tim instructed Lester to shoot the class, so that Cleveland would damage his feet, trying to escape on bare foot. After Cleveland's escape, Tim contacted him on the walkie-talkie again and told Cleveland, that he was holding his friend, Holt hostage, and got his last name from him. He got the information from Cleveland that he was married to Donna, resulting in Holt getting shot in the head. Tim then held Donna hostage, knowing he can get more information from her. Tim takes Donna down the the vault and Cleveland interrogates his way into learning their location. While down there, Donna learns that Tim's only reason for terrorism was to steal the world's largest TV, being an astonishing-for-the-time-period 27 inches wide. Cleveland comes in to save Donna, but Tim presses a gun against her temple, telling Cleveland that he'll shoot her if he tries anything. Cleveland drops the gun, but reaches behind his back, to take out a second gun, taped to his back. This unexpected gun reveal allows him to shoot the off-guard Tim. Tim and Donna fall backwards and land on the edge of a broken-open window. Tim hangs from Donna's wig and Cleveland unclips it, sending Tim plummeting to his death, but not before taking one more shot at Cleveland, which misses. This marks the fate of Tim Gruber.

Tim Gruber is basically Tim the Bear, with the hairstyle and beard of Hans Gruber, made of brown hair, that doesn't match his regular orange fur, along with a black suit, white undershirt, and red tie. 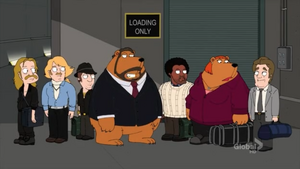 Tim and his gang of terrorists.