Homicidal Predator
The Timber Wolf is the main villain of the 1987 drama movie Benji the Hunted. He is a violent, wrathful and sadistic wolf who is set on killing Benji and the Cougar cubs. He is the boss of the Eagle.

His vocal effects were provided by Jack Angel.

The Timber Wolf is quite small compared to most North American wolves. He is a slender black wolf who is part dog and has bluish-brown eyes and grayish-white fur on his upper-jaw and nose and on the lowers have of his legs and paws.

The fact that the Timber Wolf relentlesly pursued Benji and the cubs proves that he is not simply an animal trying to survive. He even seemed to take pleasure in the idea of killing them. The book that was sold along with the original movie gives more insight on his actual thoughts. According to the book, much of his persistience is derived from hatred. It is explained that after he spots Benji for the second time, he immediately started to chase him.

As Benji returns to the cabin to get the other dead quail, the Hunter catches him and ties him up. Reading Benji’s collar, the Hunter remembers there is a reward for the dog’s rescue and plans to kill him. When the Hunter goes inside, Benji tugs at the rope, trying to break free.

Benji grabs the other dead quail in his mouth and runs back to the cubs. Benji sees an adult female cougar and barks, but she growls at him. Benji then moves the cubs to a new location, carrying each of them individually in his mouth. While doing this, the helicopter flies overhead and Benji sees his trainer in the window.

By the time Benji has finished moving the cubs to the new den, he discovers that the Wolf has eaten the quail. Benji searches for more food, barking at the cubs when they try to follow him. Meanwhile, the Wolf begins to movie in on the cubs, but the helicopter flies overhead, scaring him away.

The next day, as the Mother Cougar and her cub are walking through the forest, the Eagle signals the Wolf to attack Benji from behind. The Wolf chases Benji, but the dog manages to elude him. Later, the four cubs follow Benji along the path. A large brown Kodiak bear comes into the clearing. Benji and the cubs hide, but one of the cubs runs toward the Bear, hissing at him. The Bear growls, scaring the cub back to the hiding place. When the Bear moves toward them, Benji barks and runs the opposite direction.

The Bear gives chase, but soon loses interest. However, the Wolf appears again and chases Benji. They run a long distance over the mountain until Benji leads the Wolf to the Bear. The Bear growls and scares the Wolf away. As Benji sees the Mother Cougar near a waterfall, he runs to get the cubs, but finds the Wolf watching the cubs. Benji barks at the Wolf, then bites at him. The cubs hide under a rock where the Wolf cannot reach them.

Benji jumps on the Wolf’s back, then runs away. While Benji was being chased, he hides in a bush next to a cliff. The Wolf jumps over the bush thinking that Benji was there, but instead, it was the cliff, and Benji watches as the Wolf falls to his death while howling. 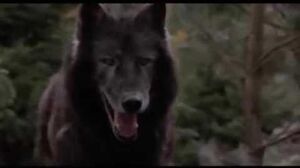