Villains Wiki
Register
Don't have an account?
Sign In
Advertisement
in: Gravity Falls Villains, Evil Vs. Evil, Reality-Warpers,
and 41 more

Ruler of the future

Save all of time and space.

Time Baby is an anti-villain from Gravity Falls from the future. He holds despotic and magisterial rule over the world in the future. He is giant baby who rivals with the series' main antagonist, Bill Cipher.

He was voiced by Dave Wittenberg.

Time Baby may be despotic, tyrannical, authoritarian and oppressive, but every action he performs is to protect the space-time continuum and the universe, despite vaporizing audience members for speaking out after he calls for silence.

He is extremely honorable and thoughtful in nature, as he grants a time wish to those who achieve victory in Globnar. He also despises Bill Cipher for his lack of concern over natural laws and rules, as shown when he coldly warns Bill that his rift would result the destruction of all existence if it continues.

Time Baby makes his final appearance in the episode "Weirdmageddon Part 1", where he is outraged to hear that Bill used Blendin's body to start Weirdmageddon by opening a powerful rift. Deciding to take action, Time Baby and his Time Police arrive to the Fearamid, where he warns Bill that the fabric of all existence will be destroyed if the rift continues.

Time Baby furiously demands Bill to either surrender himself or face his tantrum, but Bill refuses to do either and instead evaporates Time Baby and the Time Police with an energy blast from his finger, much to Blendin's horror. At the end of the episode, the code when deciphered says "IT WILL TAKE 1,000 YEARS FOR TIME BABY'S MOLECULES TO RECONSTITUTE, AND WHEN HE'S BACK, HE'S GOING TO BE VERY CRANKY!"

Eventually, in "Weirdmageddon Part 3", Stan manages to destroy Bill in order to end Weirdmageddon for good, thus avenging the (apparent) deaths of Time Baby and the Time Police. However, in a secret coded message, it is revealed that Time Baby is currently reassembling his molecules to come back, and when he does, he will "be VERY angry". 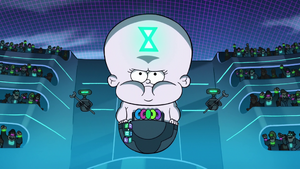