Destroy the current universe and remake it in his image.

The Time Trapper is one of the major antagonists of the Legion of Superheroes series and was originally a strange robed warlord from the extremely distant future, well past the time of the Legion of Super-Heroes. In his early appearances, the Time Trapper (also known as Paras) created a strange "Iron Curtain of Time" that prevented the Legion from going into their future. He also commanded a vast number of slaves and had a henchwoman named Glorith, whom he eventually murdered.

The Time Trapper (also known as the Time Master) appeared in 1958 to challenge Wonder Woman and Colonel Steve Trevor under the alias "T.Y. Master" by creating a diabolical "fun house". Wonder Woman and Steve Trevor were transported to various disasters throughout time when opening a door before defeating the Time Master by Wonder Woman vibrating through the doors. The villain then admitted defeat and disappeared, possibly returning to the "Iron Curtain of Time".

Later, it was revealed that the Time Trapper was a member of the fascist but well intentioned race of Controllers. The Time Trapper was defeated by the Legion and it was believed that his menace ended when the villain Darkseid removed almost all of his power during the Great Darkness Saga.

Later retcons claimed that the Time Trapper not a Controller at all, replacing this with a series of wildly contradictory origins. These various backstories include him being the Legionnaire Cosmic Boy, Lori Morning, Superboy-Prime, the living embodiment of Entropy in the Universe, and a sentient alternate timeline.

One of the more noteworthy stories involving the Time Trapper came after the reality-altering mini-series Crisis on Infinite Earths and the 1986 revamp of Superman's origin, which removed Superboy from Superman's and the Legion's history. Given the problems this posed for Legion continuity, it was later revealed that the Time Trapper created a pocket universe from a slice of time in the distant past, and altered events in this reality so that an Earth resembling the pre-Crisis one was formed, complete with its own Superboy. The Time Trapper then further manipulated the timestream so that whenever the Legion would travel into the past to visit the 20th century (or Superboy visited the Legion's future), the two would be directed into each other's worlds. However, the "pocket universe" lacked a Kryptonian Supergirl, and thus was not a perfect answer to patching Legion continuity. (The "pocket universe" was later revisited and made the point of origin for a non-Kryptonian Supergirl, also known as Matrix).

Four Legionnaires, (Duo Damsel, Brainiac 5, Saturn Girl, and Mon-El) were involved in a conspiracy to destroy the Time Trapper, against the Legion's regulations. They managed to reach his citadel at the end of time and seemingly destroyed him by using the Infinite Man against him. During this attack, Duo Damsel's second body was killed and Mon-El was put into a coma.

Following the five-year gap in Legion history, Brainiac 5 learned that the Trapper's essence had survived in Mon-El's mind. Mon-El then murdered the Trapper in the Pocket Universe, which caused a chain reaction throughout time and resulted in the sorcerer Mordru dominating the universe for a time. Mordru's former sidekick Glorith, through a magical spell, managed to take the Trapper's place in history and it was revealed that the Time Trapper had originally engineered the creation of the Legion in order to halt the inevitable rise of Mordru.

However it is eventually revealed that the Time Trapper had managed to survive and was probing Glorith's mind in an effort to regain his power. Enraged by this violation of her person, Glorith confronts the Time Trapper in the remains of his Pocket Universe and literally consumes him effectively becoming the Time Trapper.

The Time Trapper appeared to have been killed by Parallax during the 1994 Zero Hour storyline, but was apparently reconstructed with the universe at the climax of that story. He was also revealed to be Cosmic Boy. Keeping a promise he had made to the pre-Zero Hour version of Cosmic Boy, he did not intervene to ensure the creation of the post-Zero Hour Legion, but after they were formed, he briefly bedeviled them, with memories of all of his previous incarnations intact. The identity of this incarnation of the Time Trapper remains unconfirmed; some evidence suggests that it may be a future version of Lori Morning.

The Time Trapper later states that he made countless attempts to separate Superman from the Legion and erase him from the timeline, but that these attempts never lasted. The Trapper claims to have confused the Legion with "pocket dimensions and alternate history", implying that he was responsible for the creation and existence of the "Batch SW6", "Reboot" and "Threeboot" incarnations of the Legion. He also reveals that he is the one who created the crystal tablet that stated Superman to be of Earth origin.

The Time Trapper's plan came to fruition in the 2008 miniseries Final Crisis: Legion of 3 Worlds by Geoff Johns and George Pérez. He uses Superboy-Prime, which he views as a corrupted Superman, as a tool to destroy the link between Superman and the Legion. He brings Superman and the Legion founders to the end of time, where he attempts to kill them and is revealed to be an older Superboy-Prime. However, during the battle, Saturn Girl watches as the Trapper's "S" scar on his chest gains a slash across it as it simultaneously happens to Prime in the past. With this evidence, Brainiac 5 theorizes that the Trapper is in fact an alternate, sentient timeline whose identity changes constantly as the true timeline marches on, explaining the multiple identity changes he has gone through in each incarnation. In order to weaken the Trapper, the founders combined their powers, using the cracks in reality at the end of time to bring in many alternate Legionnaires to fight him. The Trapper was knocked out and brought back to the Legion's time. The Trapper tried to convince Superboy-Prime to join forces with him to destroy the Legion. However, Prime refused to believe that the Trapper was his future self and punched him, creating a blinding flash that sent Prime back to Earth Prime and destroyed that incarnation of the Trapper.

The Time Trapper appears as the main antagonist in the animated film JLA Adventures: Trapped in Time, voiced by Corey Burton. He is also connected to the time-binding artifact known as the Eternity Glass which is he is also tied by mystical chains to the Eternity Glass itself.

The Time Trapper has complete control over future time. He is able to freeze it, alter it, and even separate parts of it, thereby creating his own pocket dimensions. He cannot, however, alter events in the present time. 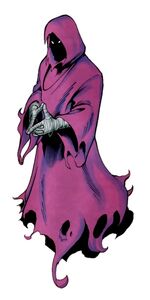 The Time Trapper
Add a photo to this gallery

Retrieved from "https://villains.fandom.com/wiki/Time_Trapper?oldid=3681230"
Community content is available under CC-BY-SA unless otherwise noted.