Leader of the Timekeepers

Determined and completely devoted to his job

Bring Will Silas to justice after seeing him in possession of at least 100 years' worth of time; prevent him and Sylvia from distributing time evenly amongst the poor population, return Sylvia to her wealthy father Philippe (failed).

Timekeeper Raymond Leon (simply known as Raymond Leon) is the main antagonist in the 2011 live action film, In Time.

He was portrayed by Cillian Murphy who also played Scarecrow in the Dark Knight Trilogy and Jackson Rippner in Red Eye.

Leon is the leader of the Timekeepers, who are special police that help keep control of the population and their time. People are automatically born with a year's worth of time, though this does not activate until a person is 25 years old. At that point, their time begins to go down, and when it reaches zero, they die. Time is the only form of currency and therefore people must pay for everything in either hours, days or months. It is impossible to die from old age and if a person is able to continuously gain more time for themselves, they could live to be hundreds of years old whilst still keeping their appearance from when they turned 25.

Leon becomes involved with a man named Will Salas after seeing he is in possession of at least a hundred years' worth of time (every person's time is displayed clearly on their lower arm). Will had in fact been given this time by a rich man who was bored with life and didn't want to live anymore, but Leon becomes determined to bring Will to justice. Will begins working with a woman named Sylvia to distribute time evenly amongst the poor population, and Leon is sent by her wealthy father Philippe to return her to him. Throughout the film, Leon continuously searches for Will and Sylvia and confronts them on many occasions, though Will refuses to kill Leon and even transfers some of his own time to him before escaping.

Leon eventually chases after Will and Sylvia in his car and holds them both at gunpoint. Will determines that Leon was originally from a poor region called Dayton but managed to escape, and now Leon constantly makes sure no one else does the same and always abides by the rules. Leon suddenly realizes that he had forgotten to replenish his own time before pursuing Will, and looking down at his wrist, he sees that he has only seconds left to live. Will and Sylvia then watch as Leon instantly dies and collapses on the ground. 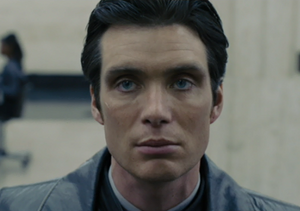 Leon attempting to bring Will Salas to justice

Will holding Leon at gunpoint 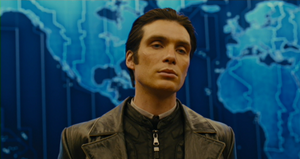 Leon pursuing Will and Sylvia

Leon times out and dies
Community content is available under CC-BY-SA unless otherwise noted.
Advertisement