Timmy's unnamed mother was the main villainess from "Bad Boys," a Season Nine episode of Supernatural. Before the episode's events, Timmy Conroy and his mother were in a terrible car accident, which Timmy survived after his mother pushed him out of the car, but she would end up killed. Her ghost resurfaced one night when Timmy was crying for her, and since then, she has been overly protecting Timmy, even going as far as killing those she believed to be a threat to her son. Timmy's mother later targeted Sam and Dean, as well as Robin, and thinking that an action figure was connected to her, Dean burned it on a stove. When she didn't disappear, Dean later stated that Timmy had to stand up to her, which he does. After Timmy reassures his mother that he'll be fine, her disfigured ghostly appearance burnt away, revealing her true self before the accident. Timmy's mother sheds tears as she took one final look at her son, before she faded away for good.

Timmy's mother was played by Jennifer Oleksiuk in her human form, and by Alika Autran in her disfigured ghostly form. 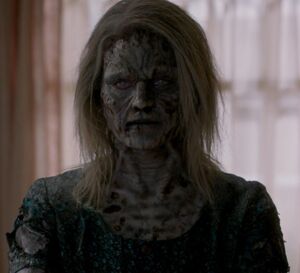